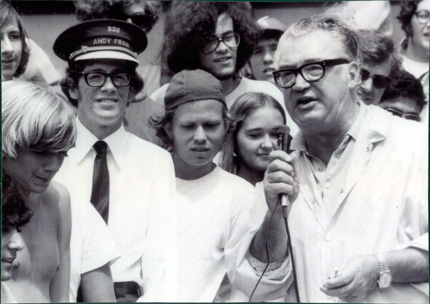 Harry Caray in a familiar sight from the early 1970s, hobnobbing with the fans who loved his charismatic style with the White Sox (Photo courtesy of the Leo Bauby Collection).

In this edition, interviews all-time baseball announcer Harry Caray conducted in spring training 1972 in Florida are featured. Renowned as a play-by-play Pied Piper who helped revive the White Sox then, Caray was also known as a good interviewer. He taped the segments and syndicated them around the country to radio stations. Scott Nelson, the Cubs’ longtime director of baseball operations until 2012, discovered several cassettes of Caray interviews at a sports collectors’ show in the late 1990s. A number of the interviews were replayed on Diamond Gems.