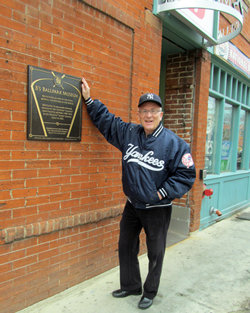 Bruce Hellerstein at his National Ballpark Museum in Denver.

What man grows up out of range of most big-league broadcasts, still falls in love with old Crosley Field and self-funds a baseball museum across the street from the home-plate entrance of Coors Field in Denver?

“It’s an incredible passion,” Bruce Hellerstein said of his National Ballpark Museum. “It might seem strange, but I really felt my (baseball-fan) needs were met during my childhood growing up in Denver.”

At 68, Hellerstein is old enough to remember attending games at 20,000-seat Bears Stadium before it was expanded into multi-purpose Mile High Stadium, eventually the first home of the Colorado Rockies in 1993. END_OF_DOCUMENT_TOKEN_TO_BE_REPLACED