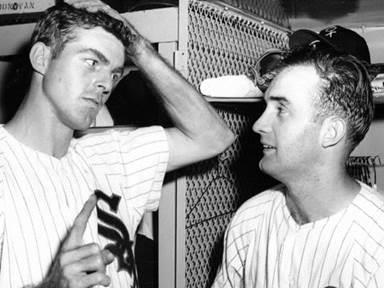 Jim Landis (left) and pitcher Billy Pierce were mainstays of the “Go-Go” Sox.

The Chicago Baseball Museum is honoring the life and career of Jim Landis, one of Chicago’s greatest all-time center fielders during his service with the White Sox in the late 1950s and early 1960s.

Landis died recently at 83. But his personality comes alive via his remembrances of the 1959 World Series on its 35th anniversary on the Diamond Gems radio show. A segment of that show can be accessed by clicking here…

In addition, CBM contributor Mark Liptak, one of the top Sox historians, interviewed Landis at-length in 2003. His narrative follows: END_OF_DOCUMENT_TOKEN_TO_BE_REPLACED