For too many years the White Sox radio home has been signal-constricted, on directional-east-at-night AM-1000 whether named WCFL or WMVP, on degraded WLS or at the nadir, the network of low-wattage suburban AM stations (WTAQ La Grange) and an Evanston FM outlet in 1971-72.

Only the team’s varying tenures on AM 670, be it WMAQ or The Score, offered a night-time skywave in all directions. But the announcement of their move to WGN-Radio on 720 AM is the best radio deal the South Siders could have come up with in the 21st century.

To be sure, the 720 frequency is not quite the blowtorch 50,000-watt clear channel of Franklyn MacCormack’s “Meister Brau Showcase,” John Mallow’s “Music Unlimited” or Jack Taylor’s “Music for Squares” of mid-20th century.  A Las Vegas station also operates on 720. The signal is still far better than the after-dark radiation on 890 AM of WLS, the station that kicked the Sox off its airwaves. Only 40 miles north of its Tinley Park, Ill. transmitter, right by Interstate 80, WLS fades just enough to allow its 890 frequency to permit reception of all-news WCBS, at 880 AM, out of New York — formerly impossible in WLS’ “Rock of Chicago” era 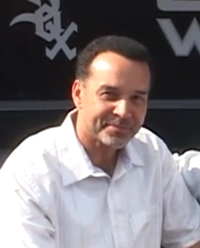 Darrin Jackson’s announcing presence will be no stranger to WGN-Radio after his early Cubs career was broadcast on the station.

Better yet, WGN still has a panache from its No. 1-rated heyday, when only the half-hour “It’s Milking Time” farm show with Orion Samuelson and Bill Mason separated MacCormack’s 5:30 a.m. signoff from the 6 a.m. start of Wally Phillips’ all-time popular drive-time show.  WGN may forever be associated with the Cubs, its meal-ticket programming most of the time from 1958 to 2014, when Theo Epstein’s rebuilding program hit hard at ratings and ad cash flow. Many critics laugh at WGN bailing out just before the Cubs surged upward — but all North Siders’ broadcast outlets took a ratings and revenue beating going through 2014. Both Tribune Co. suits in the early 1990s  and later Cubs president Andy MacPhail new the team’s broadcast outlets, under common ownership with the team,  would be hurt by a complete rebuilding program, and opted not to engage in the teardowns. END_OF_DOCUMENT_TOKEN_TO_BE_REPLACED