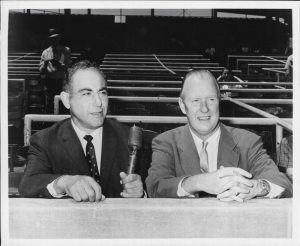 The elongated version of video highlights and a film (not an actual kinescope) off a TV monitor of Stan Musial’s 3,000th hit in 1958 caused my own postponement of other programming, such a DVR of James Comey’s ABC interview. That’s how precious Jack Brickhouse’s 1969 play-by-play of the entire Henry Aaron at-bat concluding Ken Holtzman’s strikeout-free no-hitter and Ron Santo’s heel clicking: “C’mon, Nijinsky, let’s have it…that’s it. Hah. There you go Ronnie…weeee!” END_OF_DOCUMENT_TOKEN_TO_BE_REPLACED