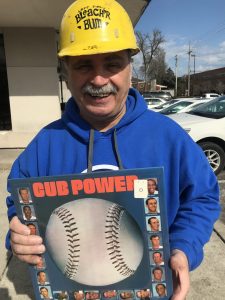 I still can’t believe an authentic Bleacher Bum, as much a part of the ’69 Cubs as their four Hall of Fame-bound stars, couldn’t count as one of the 3 million-plus in the stands in ’16. Yet Anderson knows things have changed, mostly for the better, in how the Cubs are run and how they spend their money. In contrast, they have moved backward in the quality of fan now attending games.

That concept is grasped at the same Yellow Line station in Skokie, Ill. where Anderson raced his bike the mile from Niles North High School after a 1 p.m. dismissal, so as to get to Wrigley Field arriving sometime around 1:45 during the 1st inning  after the Cubs 1:15 p.m. starts, I’ve seen the hordes dressed in Cubs regalia streaming onto the L.

Even Milwaukee Brewers fans use the $3 CTA parking lot to complete their journeys to Clark and Addison. Hardly anyone rooting for the boys in blue isn’t garbed in a Cubs uniform shirt or T-shirt. In the days of $75 and up ticket prices, many may be making their only pilgrimage to Wrigley Field in a given season. They turn the trip into a huge event instead of the casual get-up-and-go style of Anderson, his fellow Bums and the typical Cubs fan of 49 years ago.

“The fans out now, more power to them,” Anderson said. “I get a little aggravated at fair-weather fans. That don’t know the history of the team. Don’t come off to me as the greatest Cubs fan who ever lived. Try to impress me that you know Ernie Banks. They don’t know who Fergie  (Jenkins) is.”

Interesting about Fergie’s name coming up. I met Anderson near the Yellow Line station to de-brief him about vintage Bleacher Bums life for Jenkins’ upcoming book about the ’69 season, due out next January. Anderson knew Jenkins not only from his ace’s role on the mound, but also from Jenkins’ regular attendance at Ray’s Bleachers, the Bums’ official headquarters and predecessor bar to Murphy’s Bleachers on the southeast corner of Waveland and Sheffield. Remnants of that crowd drifted west to Bernie’s bar on Clark after Ray’s was sold to Jim Murphy. Go another 30 years into another millennium, and Anderson now presides at The Nil Tap, with Fergie stopping by when he’s in town.

The issue is the fans of ’69, and the following couple of decades, still were able to take advantage of the “cheap seats” that were the old, bare-bones bleachers to attend dozens of games each season. The fan could learn about the game and absorb it via osmosis the more games he/she attended.

Now, price and scarcity often limits a typical fan’s attendance to a handful or less contests in any given season. And if the fan is not wild and crazy about baseball going in, the knowledge of the goings-on is superficial.

In one way, the less discerning and critical fans, the better for management. The Cubs and other teams don’t mind the “churn” of different fans every day in single-game purchases. Making a trip to Wrigley Field is an event where a group of fans attending together might spend $50 or more per capita beyond just the ticket purchase. Beers and hot dogs flirting with the $10 cost will add up quickly.

“I might not spend more than $2 (including the $1 bleacher ticket cost) at a game back then,” said Anderson, a former custodian at Glenbrook South High School in Glenview, Ill. who now spends semi-retirement at 65 as a crossing guard for public and parochial schools a few miles north in Northbrook.

The bleachers are no longer the real cheap seats. Some diehards buy bleachers season tickets to reserve their admittance, but they still have to arrive early to lock down specific seats. Corners of the Wrigley Field upper deck are now less expensive than the bleachers, which sport a premium price for attractive games with the Cardinals and Dodgers.

Blame the Bleacher Bums for popularizing left field and other parts of the sun-drenched benches. Once the hard-hatted characters attracted attention by their creative cheers and verbal haranguing of visiting players led by Lou Brock, Pete Rose and Willie Davis, the left field bleachers became Wrigley Field’s most popular seats. Long after the Bums disbanded as a formal organization later in the 1970s, left field always filled up first. No matter how small the crowd — and there were plenty of 3,000 early- and late-season gates through the early 1980s — left field always would be mostly filled.

Now, as fans dig deep in their wallets to enjoy the same bleachers view that could be gotten for just 75 cents until 1968, they at least have some bread and circuses with a greatly expanded seating and  menu. 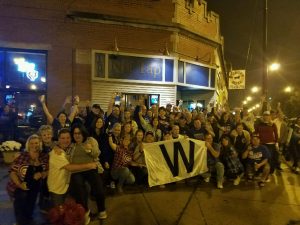 The ’69 bleachers sat just 3,300. Now, another 2,000 seats, including a party area, have  been added. An elevator has been installed. The Cubs placed some team history displays in the corridors underneath the bleachers. Both bullpens have been re-located underneath the stands, but the original concept of fans viewing the pitchers as they warmed up apparently has been nixed.

“I can see why they like the experience,” Anderson said of present bleacherites. “It’s nowhere near as basic as in 69. They were the cheap seats (compared to $1.75 grandstand and $3.50 box seats). Before you had a frosty malt guy and the hot dog guy, and the grill below the center-field stands. Downstairs was a dump. I was there to have a good time. We’d bring our gloves, and throw  balls to each other in the empty areas below.”

Anderson helped provide the off-the-field entertainment as an informal deejay. A serious collector of Top 40 records starting in 1966, he brought part of his budding collection and a portable record-player to the bleachers in ’69. Anderson would set up in the back concourse if the crowd was not bursting at the seams. Otherwise, he’d move the record player to the ramp. One of his most popular requests was appropriately “I’ll Wait a Million Years” by the Grass Roots. Little did the music fans in 1969 realize their 24-year wait for another Cubs World Series appearance would be extended another 47 years until the Cubs finally made it back to baseball promised land.

Cubs chairman Tom Ricketts likes to wander the ballpark, connecting with as many fans as possible. But Ricketts never pulled off a Bill Veeck as the 2016 postseason connected. In 1959, Veeck moved around old Comiskey Park, taking names of ever-loyal White Sox fans to ensure they’d get into that team’s first World Series in 40 years.

Ricketts attended Jenkins’ surprise 75th birthday party at the Nil Tap. Anderson was there. I hope the current Cubs owner and Bleacher Bum connected. That’s a necessary link, better late than never. The next World Series the Cubs make is one where Anderson and surviving Bums should be back in their old seats as a tip to the hat for they did for the franchise in 1969.