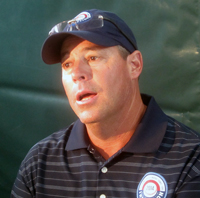 Which will be the manager who will revert to the good ol’ days rather than panic at the first baserunner in the fifth inning, or believe every arm in the bullpen is there to be used at any time, and we don’t care if we run out of pitchers in extra innings?

Just go back into the 1990s at BaseballReference.com, and you’ll see some examples of quick games that would knock your socks off. I’ll give you the best example I’ve ever witnessed, having neglected to previously write about its 20th anniversary last July 22.

On that date in 1997, the Braves’ Greg Maddux stunningly used just 76 pitches, just 13 of them balls, to stifle the Cubs in the first game of a doubleheader in Wrigley Field. Game time was two hours, eight minutes. The Cubs tried to negate Maddux’s ability to craft the corners of the zone by swinging at the first or second pitch. That tactic also failed miserably. He allowed just five hits and no walks in a 4-1 victory, reminding the retired Stanton Cook and the billable-hours-heavy Dennis Homerin how spectacularly they gummed up the Cubs’ ability to win by yanking a $25 million contact to which Maddux agreed off the table just 5 ½ years previously.

Even by Maddux’s then-lofty standards, we witnessed history. Only six complete games in history had ever been tossed with fewer pitches than Maddux threw. So we scribes, bored by the Cubs’ death march through the dog days after starting out a record-worst 0-14 in 1997, made a beeline for the visitors’ cramped clubhouse to try to get perspective out of the soft-spoken Mad Dog.

“I thought they (the Cubs) were aggressive and rightfully so,” he said, not reveling at all in yet another mound feat. “If you are going to get me, get me early in the count. Why not? That’s not bad to do. When you are aggressive early in the count and the wind is blowing in like it is and the grass is the way it is here, you have a chance to do something like that.”

Few pitchers ever studied their own craft and scouted out hitters the way Hall of Famer Maddux did. He kept his game simple. The best pitch, he often said, was a well-located fastball. Anything else he possessed played off that basic dictum. Why modern-day pitchers don’t try to copy something that worked so well Maddux won 355 games, I cannot comprehend.

Game times are bloated because a Jon Lester, who should know better, can’t go more than five innings after running up his count past 100. So many times in the Cubs’ run have pitchers sealed their fate with copious full counts and forcing managers to prevent them facing the lineup a third time – by the fifth. That forces a bullpen parade and a multiplicity of further stoppages that push relatively low-scoring games well past the three-hour mark.

Starters almost act like the hitters they face. They cannot throw Maddux-ian strikes even with a $200,000 bonus waiting for them in the contract fine print. They almost doodle around the zone like the batsmen trying to work the count full, another cause of time inflation. Put the two together, and you’ve got a witches’ brew that only the sabermetrics crowd, on salary in the front office and commanded to work long hours, can appreciate.

In that 1997 era, I had a bad deadline for night games working for The Times of Northwest Indiana, compared to other suburban newspapers. Typically the first filing time was 10:15 p.m. At one point it crept to 10:30 before being pushed back earlier.

Praying for Tapani to pitch at night

Since I was paid by the story without extra compensation for doing a re-write for a later edition, I rooted hard for a Kevin Tapani, fastest-working Cubs pitcher of his era, to craft a vintage game to prevent the Cubs from batting in the bottom of the ninth. I needed the game over by, say, 9:50, so I could dash downstairs to the clubhouse, get a few quotes, ride the elevator back up (those steep Wrigley Field ramps are killers) and complete my one-and-done story.

If the game ended just short of 10:15 or 10:30, I’d watch the Cubs manager’s post-game press conference on a closed-circuit video feed in the pressbox lunchroom to plug in the quotes.

Seven hits and four walks allowed in 9 1/3 innings, and Bob Gibson had a complete-game loss against the Cubs in just one hour, 58 minutes in 1971.

The fans, of course, did not care about my deadline dashes. However, how many stuck around to the bitter end if a weeknight game drifted toward the three-hour mark? How many home-bound fans watching on TV were wide awake for the end? Move the clock forward two decades, and that end is moving toward 11 p.m. or later. Football-sized final scores of 18-16 usually were responsible for flirting with the four-hour mark. Now it’s incapable starters and nervous managers who both might as well bunk at the ballpark, they love it so much.

I don’t know how Bob Gibson made quick work of his Opening Day loss in 1971 at Wrigley Field by allowing seven hits and four walks in 9 1/3 innings. Oh, I forgot that frozen afternoon (I left my gloves at home for the first of my 41 consecutive Wrigley openers). Gibby worked fast in-between baserunners allowed. Opponent Fergie Jenkins was even faster and more efficient. Three hits and no walks allowed in 10 full innings of work. Billy Williams won the game with a one-out walkoff homer against Gibson in the 10th. Game time: one hour, 58 minutes.

And if you go even further back, WGN had room for just a 60-second commercial in between the innings. Check Don Cardwell’s 1960 no-hitter on YouTube. Vince Lloyd’s live spot for Oklahoma Gas going into the top of the ninth that afternoon was just one minute, and he had to talk fast to get off in time.

Somehow, history has taken a back seat to sabermetrics numbers crunching that fattens up game times. If that trend continues, the financial people will crunch back with declining TV ratings and concession sales from fans who simply gave up after three hours and 6 ½ innings.

Can’t say they weren’t informed of the facts.