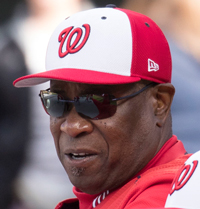 Dusty Baker would not be human without time-tripping to his Cubs days during the NLDS. Photo credit Keith Allison.

The upcoming National League Division Series between the Cubs and the Washington Nationals should be the crown jewel of the postseason.

Young stars like Las Vegas natives and youth-baseball contemporaries Kris Bryant and Bryce Harper will duel each other as former MVPs. Will a Madduxian craftsman like Kyle Hendricks be able to outpitch super-stuff practitioners like Max Scherzer or Stephen Strasburg? Wade Davis was 98 percent automatic in the regular season, and needs to continue that mojo without interruption.

And all must be done quickly, as the five-game series is the playoffs’ cruelest round with its abrupt elimination factor.

Too bad some unfinished Cubs business from 2003-04 will provide a sideshow: the Nationals’ Dusty Baker managing against the team he elevated, and then supposedly allowed to disintegrate.

Both the Cubs and Baker have long moved on from the roller-coaster years of the latter’s second, and most controversial, managing job. But Cubs fans and media filling time and space won’t let it go, and Baker himself would be less than human if he did not feel an inner desire to prove himself against a team that built him up and tore him down.

Too bad the Baker storyline will take away from the dynamic angles of a Cubs team that gathered momentum at the right time against a Nats club that finally seems loaded for bear after several seasons of quick postseason exits. Some old stories will re-surface. So, to get them out of the way before the first pitch, let’s separate truth from legend:

So, given all the above, here’s wishing the focus is on two attractive teams playing in the fall of 2017 rather than ghost games and injured pitchers from 2003-04.