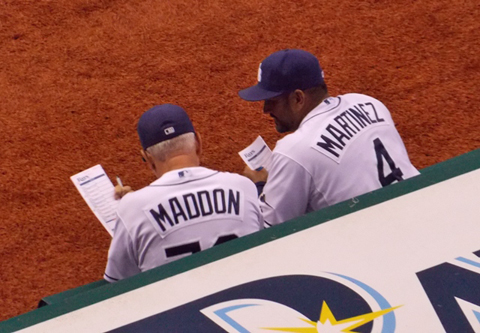 Davey Martinez was a three-time Cub before he was named Nationals manager. Photo used with permission of Jeff Briscoe.

If any of us had the number of job rejections Davey Martinez experienced, we’d likely have gone nuts.

The brand-new Washington Nationals manager and three-time Cub (twice a player and for the last three years Joe Maddon’s bench coach) has been qualified for years to move up to run his own team. Maybe, as Jim Riggleman once experienced in a long dry spell, he was not politically in with the GM to get the managing job. Maybe it just wasn’t his time.

Here’s the journey Martinez experienced until he finally nailed it down:

After getting hired in Tampa Bay as Maddon’s bench coach in 2007, Martinez interviewed for the Blue Jays’ and Indians’ manager’s jobs in the 2010 off-season. A year later, he finished behind Robin Ventura in the quest for Ozzie Guillen’s successor.  He bid on the Astros’ job after 2012, but Bo Porter was selected as Houston embarked on its now-successful rebuilding program.

Martinez first tried to convince GM Mike Rizzo, a native Chicagoan, to hire him for the Nationals after 2013. Matt Williams got the job, to Rizzo’s regret. He also tried a return to the Cubs to succeed Dale Sveum, but Rick Renteria nailed down the rebuilding steward’s position.

Maddon found his contractual out from the Rays after 2014 to bump Renteria (many believed unfairly) out at Wrigley Field. The logical Tampa Bay successor seemed Martinez, who made his year-round home in the area. Future Cub Ben Zobrist, Evan Longoria and Alex Cobb backed Martinez. Somehow he did not make the three finalists with Kevin Cash the winner.

Now Martinez is really under pressure. The Nationals’ seemed poised to finally break through for a long postseason run a few weeks back. Instead, they suffered their fourth NL Division Series knockout in the past six seasons. The Nats are the most frustratingly talented franchise in the game. Two more early playoff failures cost Dusty Baker his fourth managing job and prompted more smears on his reputation.

Maybe Martinez offers a new voice that finally works. He’s no hard-bitten, holler guy. I’ve known him since he was a raw Cubs rookie outfielder in 1986. Perhaps quiet toughness works well with a team loaded with stars in the lineup and starting rotation.

He certainly has good baseball breeding. Martinez was part of a bumper crop of good-to-great position players produced under the Dallas Green-Gordon Goldsberry Cubs regime in the 1980s. Almost all the home-grown kids benefited from the drill-sergeant coaching of minor-league instruction chief Jim Snyder. Jimmy Piersall signed on as Cubs roving outfield instructor in time to work with Martinez.

He’ll always have firm Chicago ties. Wife Lisa hailed from northwest suburban Hanover Park. At one point during his 2½ seasons as a Cub, Martinez commuted the long distance to Wrigley Field, joining the likes of Dan Plesac and Mickey Morandini with hour-long drives from far-flung suburbs.

Martinez was caught in the management turmoil that followed Green’s forced departure late in 1987. He had batted .292 as a platoon center fielder with Bobby Dernier in ’87, then got off to a middling start in 1988 under GM Jim Frey and manager Don Zimmer.

At mid-season he was abruptly traded to the Montreal Expos – the ancestor franchise of his new team – for outfielder Mitch Webster. Eyebrows continue to be raised over the trade of a good young player for a journeyman. Let’s just say it was one of number of bad deals Frey executed before he got the gate after a failed free-agent splurge in 1991.

Martinez then made a grand tour of the majors through seven more teams, including the White Sox from 1995-97. I recall asking Martinez why the Sox made themselves so scarce in their locker room for post-game interviews under media-averse manager Terry Bevington. His response was the team played so many long games they simply wanted to zone out in Herman Schneider’s spacious training area.

His Cubs return in 2000 as a backup outfielder lasted just 18 games. Martinez played with three teams in his second-to-last season, finishing with the Braves in 2001 with 1,599 lifetime hits and .276 average.

Martinez surely envisioned one day getting a ring in Chicago as a Green-Goldsberry Cubs player. He got his wish – but as a bench coach. One year after the title, they broke up Maddon’s band of advisors pretty resolutely.

Yet Maddon had trained Martinez for years for this opportunity. Smarting over their error-and-bad calls-filled stumble to the Cubs in the NLDS, the Nats will surely be up for their six 2018 games against the Cubs, Martinez now matching wits with Maddon.

We won’t likely see David Ross fill Martinez standing spot next to Maddon as bench coach. Maybe one day he’ll manage – he’d be a natural – and yet Grandpa Rossy is still decompressing from his playing career and tough travel. He’s got young kids at home. Let him dance and ESPN-analyze and serve coffee as Bryzzo’s intern for now. His time will come.

For the well-trained ex-Cub-turned manager, the time is past due to occupy the hot seat. Best wishes to Martinez. I can say I knew you when.