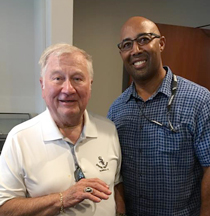 Rick Renteria would be the last man who’d drive the White Sox in a march toward the rear – baseball’s worst record and the No. 1 pick in the upcoming June 2018 amateur draft.

Although the Sox came into September in contention for the reward for ignominy in their ongoing rebuilding program, manager Renteria knows anything promoting inept play is fool’s gold.

First and foremost, any hint of tanking creates a bad attitude on the field. And Renteria has been all about hustle and playing the game correctly, reflected in the Sox’s on-field efforts despite a shortage of talent. He also is breaking in Yoan Moncada into the lineup and Lucas Giolito and Reynoldo Lopez into the rotation. The latter two pitchers in particular have shown their expected promise. Renteria wants to develop a winning attitude from the get-go.

Almost as important is, historically, a supposed reverse drive for the No. 1 pick does not result in an automatic talent bonanza. Far from it. About half of all top picks do not enjoy significant big-league careers, if they even make the majors at all.

The Sox and Cubs have snared the No. 1 pick on three occasions. Two of three No. 1 Chicago baseball picks had noteworthy careers.

Baines was the first high school player chosen first in the MLB draft since the Texas Rangers’ David Clyde in 1973. Baines batted .532 his senior year of high school at St. Michaels (Md.).

Veeck picked Baines rather than Bill Gullickson, the top‐rated pitching prospect in the draft from Joliet, because of the potential he saw at early age “I saw him play in Little League and he impressed me even then. I’ve been watching him for six years.” Veeck was quoted after selecting Baines in 1977.

The Expos picked Bill Gullickson as the No. 2 draft pick and he  went on to set the rookie strikeout record with 18 – later broken by Kerry Wood – against the Cubs in 1980.

The Sox received a lot of criticism for selecting a high school player requiring a lot of seasoning No. 1. They signed Baines for $32,000 far less than Gullickson got.  The Sox also passed on future Hall of Famer Paul Molitor, who was drafted third by the Brewers after being plucked from the University of Minnesota.

After his draft selection, the 18-year-old old Baines worked out with the White Sox in Baltimore’s Memorial Stadium before a scheduled game with the Orioles. With all the baseball eyes cast on him as the top draft pick, Baines first appearance in the show was a total disaster. He told the Chicago Baseball Museum earlier this month: “I barely hit a ball out of the cage. I felt a lot of pressure on me to prove myself.”

Baines struggled early in his minor leagues with his first stop at Appleton, Wisconsin in the Class A Midwest League, where he batted .261 in 222 plate appearances. As a result, the Sox were widely criticized with picking Baines No. 1.   But in his next two stops at Knoxville and Iowa, he started demonstrating the promise that Veeck had seen.  He came up to the Sox and batted .255 as a rookie in 1980.

In the recent interview, Baines, who was the most loquacious we have ever encountered the traditionally quiet, dignified man, said:” I wasn’t sure I would be No. 1 because I thought the Sox would take Gullickson.”

While he nearly racked up 3,000 hits, he fell short of the Hall of Fame. Baines is 46st on MLB all-time hits leaders list.  Of the top 50 all- time hits leaders, all but Baines so far are Hall of Famers. Derek Jeter and Omar Vizquel should make Cooperstown. Barry Bonds and Alex Rodriguez could have their Hall of Fame paths hindered by PEDs connections, while Pete Rose has been banned from Cooperstown consideration since 1989 due to his gambling issues.

“It wasn’t meant to be,” said Baines, who is still proud of his long MLB career and his 2005 World Series ring when he was the bench coach for Ozzie Gullien, his Sox teammate for many years.

Baines suffered a right knee injury during the last week of the 1986 season, leading to multiple surgeries and eventually a right-knee replacement.  Baines injured his knee when he stepped on the ankle of Minnesota pitcher Neal Heaton on a close play at first. The injury effectively ended his days playing in the outfield and he became a full-time DH.

Known for his stride into a pitch, taking a high step with his right leg, a la Mel Ott, Baines was traded away from the Sox in 1989 as part of the Sammy Sosa deal from Texas. Immediately, the Sox retired Baines No. 3.

“I hated seeing my (retired) number up on the wall when I came back to play in Chicago. I was upset I got traded,” Baines said.

Though he still lives in Maryland, Baines loves Chicago and his new role as an ambassador for the White Sox after being a coach for a number of years after retiring in 2001.

“I am so glad Bill Veeck and Roland Hemond believed in me,” he said. “I have not spoken to Mary Frances Veeck in a while. “I loved Roland (Hemond) like a second father.” Baines who got reunited with Hemond when he went to the Orioles, the latter’s second GM job, in 1993. 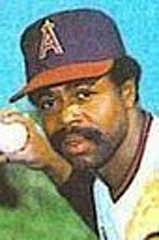 Danny Goodwin twice was the No. 1 pick in the draft, but opted not to sign with the Sox the first time in 1971.

Back in 1971, then-new GM Hemond struck out big-time, the Sox unable to take full advantage of their 106-loss disaster of the previous season. Hemond selected high school catcher Danny Goodwin of Peoria. But Goodwin elected not to sign, went to Southern University and re-appeared four years later as the 1975 draft’s No. 1 pick of the Los Angeles Angels. Goodwin went on to be a backup catcher with the Angels, Minnesota Twins and Oakland Athletics.

Some though the Cubs acquired the “next Ernie Banks” via Brooklyn high school shortstop Shawon Dunston with their sole top pick, in 1982, first draft of the Dallas Green GM regime. Instead, the Cubs only got the “first” Shawon Dunston, an energetic, rocket-armed infielder who spawned Dave Cihla’s famed “Shawon-O-Meter” in 1989 after Dunston finally conquered early-career offensive hiccups. Dunston managed to last 18 seasons, becoming a valuable utilityman late in his career with the San Francisco Giants, for whom he later coached. Son Shawon Dunston, Jr. also was drafted by the Cubs.

Some interesting sidelights enveloped the Cubs and Sox draft choices and other occasions when the teams picked high in the first round.

For a number of decades, the leagues alternated in draft order. The 1976 Sox underwhelmed with 97 losses. Meanwhile, the Montreal Expos led all of baseball with 107 defeats. However, the Sox went first in the alternating order to pick Baines. Veeck was so in love with Baines that would have taken him no matter who was still on the board if the Sox had chosen second.

Meanwhile, the Cubs chose Dunston five picks ahead of Tampa high schooler Dwight Gooden, taken by the New York Mets. Gooden’s startling emergence as a pitching superstar in New York at 19 in 1984, while Dunston was still climbing the minor-league ladder, led some to second-guess the Cubs’ selection. However, Gooden later had drug issues while Dunston, while a champion trash talker, became a relatively solid baseball citizen and near-decade long double-play partner of Ryne Sandberg. 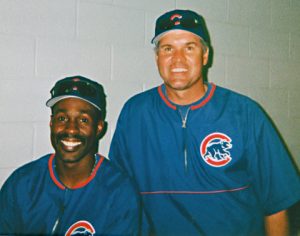 Shawon Dunston (left) was drafted No. 1 over Dwight Gooden in 1982 and teamed with Ryne Sandberg (right) as the Cubs’ double-play combo for the better part of a decade.

The Cubs found themselves in the 1976 Expos’ alternating-pick situation in the 1967 draft. Despite leading baseball with 103 defeats in Leo Durocher’s first managerial season in 1966, the Cubs had the No. 2 pick behind the New York Yankees, who had finished last in the American League in ’66 in the final collapse of their old dynasty.

The Bronx Bombers picked Atlanta strong-boy Ron Blomberg, who would go on to be the first-ever designated hitter in 1973. The Cubs selected South Carolina high school infielder Terry Hughes despite having Ron Santo in his prime at the time. Hughes had just three plate appearances in two Cubs games in 1970 before eventually having cup-of-coffee stints with the St. Louis Cardinals and Boston Red Sox in 1973-74. Meanwhile, the Houston Astros landed future slugger John Mayberry with the sixth pick, while the Cardinals snared switch-hitting catcher Ted Simmons at No. 10.

Hughes’ fate was pretty typical for Cubs’ top position-player picks of the day. He no doubt was an inferior white player than players of color still on the board. But the Cubs draft room, dominated by Southern-raised scouts and the non-enlightened GM John Holland, focused on these lesser lights at the expense of the findings of black scout Buck O’Neil. The Cubs did not draft an American-American No. 1 from the draft’s onset in 1965 until O’Neil-recommended outfielder Joe Carter in 1981. Top O’Neil drafted picks were outfielder Jimmy McMath and pitcher Lee Smith, No. 2 each in 1967 and 1975.

The Cubs totally blew it on Johnny Bench in that first ’65 draft. But so did all 19 other teams. Bench, from tiny Binger, Okla., was passed over completely in the first round as the Cubs chose Alabama prep pitcher Rick James, who appeared in a total of one big-league game. In the second round, with Bench still available, the Cubs selected California catcher-outfielder Ken Rudolph, who went on to backup duty behind Randy Hundley by 1969. Bench said in 1998 he expected to be drafted by the Cubs, backing up the assertions of Dallas-based Cubs scout Bill Capps, who had unsuccessfully pitched the future Hall of Famer to the front office. 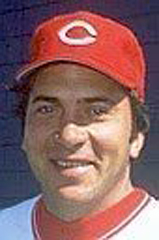 Johnny Bench expected the Cubs to draft him in 1965. But the Cubs passed over Bench twice before the Cincinnati Reds picked him.

The Cubs also sweated out No. 2 picks for their preferred choices in 2000 and 2013. In the first season, the Twins landed hometown prep hero Joe Mauer with the top choice and the Cubs were able to draft pitcher Mark Pryor second.  Then, in 2013, the Houston Astros passed over all-everything University of San Diego hitter Kris Bryant to take Stanford pitcher Mark Appel with the No. 1 choice. Bryant has a rookie of the year and MVP award with the Cubs to his credit while Appel has yet to throw a big-league pitch.

The Sox and Cubs, however, still have not experienced the all-time bad luck experience with the top pick in a draft. In 1970, the Bears and Pittsburgh Steelers had to flip a coin for the No. 1 pick, each having underwhelmed the NFL in 1969 with 1-13 records. The prize was Louisiana Tech quarterback Terry Bradshaw. The Bears lost the pick. Instead of picking another prize player in the draft, the ineptly-managed Halasmen traded the now-second pick to the archrival Green Bay Packers for a package of middling veterans who contributed little to the team, which continued to plumb pro football’s depths through 1976. Meanwhile, the Packers picked Notre Dame lineman Mike McCoy.

So when a baseball fan is undersold on a top Chicago draft pick, there is always something worse in Bears annals to cry about.