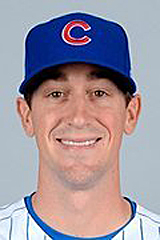 He was susceptible to good left-handed hitters early and late in his career. Frankly, in his second Cubs tenure in 2004-06, the aging Maddux was relatively easy meat for southpaw-swinging power men. And before he mastered the string-pulling fastball that headed toward a lefty hitter’s body before darting over the inside corner, Tony Gwynn was Maddux’s “daddy.”Once he began overpowering hitters with his mental acuity and pinpoint control, Gwynn practically surrendered to Maddux like no other pitcher. That darting fastball was so unhittable to Gwynn, he reasoned, that the best strategy was simply to take it and wait for the next-best pitch more over the plate.

Kyle Hendricks never seemed to have that issue. And that’s why the cerebral right hander rightfully drew the Game 1 (and likely Game 5) starting assignments for the Cubs against the Nationals in the NL Division Series. Joe Maddon, far separated from the Cubs’ timeline in 1989, is not likely aware of the situation. But his money pitcher, who requires afterburners to nudge his best fastball into the 89 mph range, has so far out-Madduxed Maddux in clutch Cubs annals, if not over the latter’s career.

Once Hendricks put himself into Cy Young Award contention in 2016, his style of moving the ball up and down, back and forth, with a minimum of speed and modicum of style, was best compared to Maddux. There was a big difference. Having his head handed to him at key postseason moments and other regular-season failures persuaded Maddux to dial back his best fastball from the low 90s, even up to 93 mph, for move movement and purpose. Hendricks, though, never possessed even that kind of modest velocity.

Obviously, Hendricks had to work even harder to outthink big-league hitters than Maddux. And he has paid off in money games. In eight postseason games with the Cubs since 2015, Hendricks was 2-1 with a 1.98 and 1.000 WHIP. He was a cool cat in Game 7 of the World Series last year, but Maddon was determined to pull him after five innings. Capt. Hook  got a little too cute, pulling an effective Hendricks after issuing a two-out walk in the fifth and setting in motion some shocking relief performances that required a rain delay and team meeting to set matters straight for the title.

When the pressure was really on, Hendricks did not crack while having to hold his tongue with Maddon’s proscribed early departures. He gave up one earned run in 9 1/3 World Series innings in 2016. Any pedigreed starter with a bigger name and fastball than Hendricks would settle for that mark.

Compare Hendricks with Maddux in his first trip to the big stage in ’89. He gave up 11 runs and 13 hits to the Giants in 7 1/3 innings over two starts, hard on the heels of a 19-win season.

Maddux had dropoff in postseason 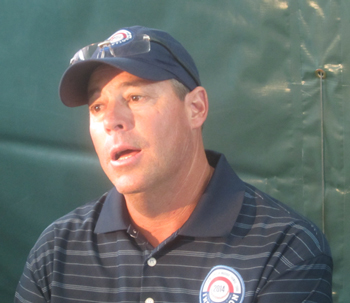 Greg Maddux suffered a dropoff in performance in October compared to the regular season.

Although the Braves won the bulk of their 14 straight division titles with Maddux topping the rotation, he experienced a dropoff in the postseason that no doubt contributed to just one World Series title, in 1995, for all the regular-season triumphs. He was 5-3 with a 3.42 ERA in the NLDS and 4-8 with a 3.67 ERA in the NLCS. Cumulatively, Maddux gave up more hits than innings pitched in both playoff rounds (no doubt skewed by the 1989 disaster). Only in the World Series did he statistically come back to par with a 2.09 – and that was not enough to prevent a 2-3 record.

I did not embark in a massive statistical breakdown to see if other lefty hitters followed Clark to reach Maddux in subsequent postseasons. I don’t have Theo Epstein’s statistical posse to help crunch numbers. But it is obvious that for all his sublime accomplishments, somehow Maddux was not able to out-pitch opposition aces in October.

So far Hendricks has not shown vulnerability against lefty hitters. He’ll be put to a supreme test against Bryce Harper and Daniel Murphy. And maybe the numbers will even out the longer Hendricks pitches in the postseason.

If you stick around baseball, you’ll see almost anything.  The Cubs pitcher with the shortest resume is the man of the hour. And out in Las Vegas, or wherever the ol’ master may be decamped these days, no doubt Maddux will be thinking along with Hendricks on each pitch. Maddux is a born-and-raised Cub, and will always personally identify with the team for which he worked on three different occasions. He’ll no doubt be enthusiastically rooting for Hendricks to go where he couldn’t.