“It’s just who I am,” Ross said, appropriately dressed in 1919 garb, complete with straw skimmer, for the opening of the exhibit. “My theory is things like mythology and legend are inspired by historical stories and truth.  But it gets warped (over the decades). That’s why these figures (with sharp edges) don’t look like photographs. In that mythic world, you appear like you do in a dream.

“Life is kind of a like a coin. It has two sides. It’s the same as who we are. We have a historical side that our friends may know, and a mythic side. When you look at historical interpretation in novels, poems and especially movies, it’s based on a true event. And then it’s altered.

Mythology added on through the decades

Around the 70th anniversary of the Black Sox, two movies further advanced the mythology.  “Eight Men Out” purported to tell the historical side, but the whole process surely was surely Hollywood-ized with fictional angles for dramatic effect.

Then came “Field of Dreams,” an all-time cinematic master of mythmaking and Americana. First Shoeless Joe Jackson, in the form of right-handed hitting Ray Liotta portraying the southpaw-swinging batsman, appeared in the cornfield. “It’s a myth, so maybe in the next world Shoeless Joe hits right-handed,” Ross said. Then Shoeless Joe’s Black Sox teammates wandered out of the stalks, complete with a catcher. As we know, 1919 White Sox catcher Ray Schalk  was one of the “Clean Sox” and no backup joined the plotters.

Whether history or myth, the Black Sox Scandal’s tentacles reached far beyond newbie baseball commissioner Landis’ banishment-for-life of seven active participants and Weaver. The third baseman purportedly heard of the scheming, but did not violate the eternal baseball code by tattling on his teammates. Weaver was caught in the dragnet of guilt-by-associaation. (https://www.clearbuck.com)

In fact, the Black Sox helped create even more mythology on even bigger stages. Babe Ruth’s “called shot” on Oct. 1, 1932 in Game 3 of the World Series was the outgrowth of Landis’ mid-summer ’32 investigation into Cubs manager Rogers Hornsby’s borrowing money from his player to cover racetrack debts.

Landis’ ears perked up at the slightest hint of gambling. In the nervous atmosphere of Landis’ probe, Cubs players voted newly-acquired shortstop Mark Koenig, a former Ruth Yankees teammate, only a quarter World Series share. Angered, Ruth called the Cubs cheapskates and chiselers. The Cubs and Ruth razzed each other with epithets and body English before and during his homer off Charlie Root, but no newspaper or radio account mentioned Ruth pointing to call his shot. Old movies show Ruth gesturing at the Cubs dugout instead. However, Ruth knew a good yarn when he heard it, and played along with the myth.

Signs warning of the absolute ban against betting are posted in every big-league clubhouse. Pete Rose, who thought he could conquer anything, ignored them in his gambling addiction and was himself banished for life exactly 70 years after the 1919 World Series. Since the Black Sox’s collective ejections from the game are considered settled law by all subsequent commissioners, no amount of tardy remorse from Rose will get him back into baseball.

Interestingly, the Black Sox scandal itself had its origins in Wrigley Field, as then-Cubs president William Veeck, Sr. appealed for help investigating an apparent effort to throw a 1920 Cubs-Phillies game. Soon, however, the Cook County grand jury inquiry shifted from that incident to much bigger game from the 1919 World Series.

The mythology came back to the Cubs again, many decades after the “called shot.”  Commissioner Bowie Kuhn heard rumors manager Leo Durocher might have done some gun-to-his-head managing in the “black cat series” between the Cubs and Mets at Shea Stadium on Sept. 8-9, 1969 to pay off  a $50,000 gambling debt. Kuhn investigated Durocher after the season and into spring training 1970. He asked Chicago columnist Rick Talley to sit on the news of the probe for the good of the game. Talley complied. Kuhn cleared Durocher, but proved the ghosts of the Black Sox keep dragging their collective ball-and-chain through MLB headquarters no matter how much distance is put between the present and 1919. 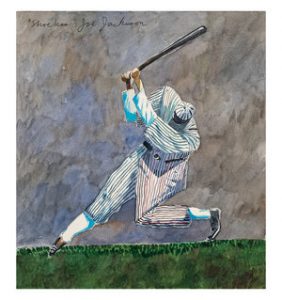 And in yet another comical twist, inept wrong-side swinger Liotta ended up with Cubs matinee idol Mark Grace’s first wife. Grace paid $1 million, then a hefty price, for a Malibu home so the former Michelle Messer could pursue an acting career circa 1990. Say it ain’t so, Joe. Messer only got a bit part, but ended up with Liotta, who later had his head opened up for brain-tasting by Anthony Hopkins in a “Silence of the Lambs” sequel.

An entire museum would have been required to house all these tangents. But Ross did a good job with one big gallery room at the Beverly Arts Center. Dozens of his drawings line the walls. Each of the Black Sox sketches is accompanied by the player’s real photo, to illustrate Ross’ history-mythology contrast. Weaver’s smiling face in black-and-white personifies the real person while the sketch shows what we might think he’d look like through all the oral history and other mythology media.

The absolute symbolism of the Black Sox’s actions is displayed by just looking up. Attached to the ceiling on one side of the gallery are replicas of big money — $10, $20 and $100 bills.  Ross is saying the actions of the Black Sox are hardly an outlier. What would any of us do if the prospect of easy money was dangled within easy reach?

Ross, 67, is no baseball rookie. He grew up a Giants fan in San Francisco. “Who was 24? Who was 44?” he asked a visitor. Of course, they were gimme questions with answers for Willie Mays and Willie McCovey, respectively. So from a distance of nearly 2,000 miles, he understood the Black Sox’s impact on culture.

In 1984, Ross created “The Catch” — a diorama for the Hall of Fame illustrating Mays’  legendary catch in the 1954 World Series, called on NBC-TV by Jack Brickhouse.  For the 50th anniversary, he created a new version of the work for display  in various locations in New York. In 1998, Ross created “The Defining Moment” for Safeco Field, a tableau of 11 steel cutouts of a Ken Griffey, Jr. play in the 1995 baseball playoffs.

“Leave history out of it,” Ross said. “These eight guys have mythic power because of their tragedy.