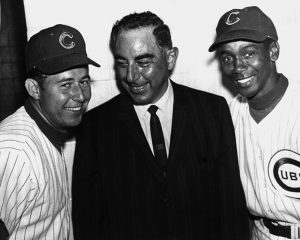 Imagine a Santo with a modern day medical monitors, being able to head off symptoms at the pass. Cubs closer Brandon Morrow, former Cubs outfielder Sam Fuld and ex-Bears quarterback Jay Cutler were not hampered in their careers through modern medical monitoring of their Type 1, called “juvenile diabetes” in Santo’s time.

He would have had even greater offensive numbers during his 1963-70 prime, and perhaps not have fallen off as quickly as he did in his final four big-league seasons, the last a controversy-filled campaign with the White Sox in 1974. The several Hall of Fame voters who did not like Santo for his 1969 heel-clicking wouldn’t have been enough to deny him entrance into Cooperstown while the then-Cubs broadcaster was still living. Santo ended up selected in a kind of guilt-ridden posthumous vote by an incarnation of the veterans committee soon after his death in 2010.

In spite of not ever playing in a postseason, a Santo with an additional 30 or 40 more homers and, say, a .285 lifetime average instead of 342 career homers and .277 perhaps gets voted into the Hall of Fame during the initial writers’ voting. His trio of Cubs-comrades-in-arms — Jenkins, Ernie Banks and Billy Williams– all were comfortably elected by the writers.

Along with other Chicago media, I was with Santo at his Scottsdale, Ariz. home in spring training 2003 when a much-awaited Hall of Fame vote was being announced. We all thought Ron was a semi-sure thing. A WGN camera was set up by his swimming pool for a live interview. The call from then-Cubs media relations director Sharon Pannozzo never came. I credit Santo for professionalism in still doing a radio interview with me even while feeling crushed. At the end of the 2003 season, with a Santo cancer diagnosis in hand, the Cubs decided to retire his No. 10 while he could participate in the ceremony. The team normally did not retire numbers unless their wearers were already in Cooperstown.

The reason I bring up Santo is all the research I have conducted into a book on the 1969 Cubs I am co-authoring with Jenkins. Santo drove in a career-high 123 runs in ’69, playing in 160 games. Many felt Santo should have been a superman and knocked in 150. The cleanup hitter had 27 homers by late August, but only two in September when Cub Power was needed the most.

Jenkins told of clubhouse caudillo Yosh Kawano bringing a candy bar and Coke to the dugout in mid-game as Santo’s insurance policy. His diabetes was only known to some Cubs in ’69. The general public was not informed until at least 1970 — I spotted a Chicago Tribune story from that year referring to Santo’s affliction. How much he lost off his run production can’t be quantified.

But from the hindsight of history and knowing the effects of under-regulated diabetes on the body, he surely was hampered, playing all day games at Wrigley Field, then traveling to the Eastern and Western time zones for road games. Like his teammates, Santo likely was hurt by “shift work disorder” with his circadian rhythms thrown out of whack by different work, eating and sleeping schedules. Toss in an insidious disease that eventually ate him up, limb by limb in his later years, and you see what he overcome — and what he left on the table. 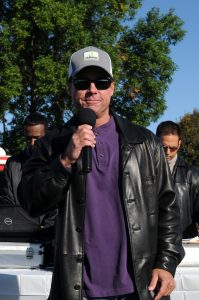 Ron Santo, Jr. at one of the walks in his father’s name to benefit diabetes research.

When Santo finished “For Love of Ivy,” his 1993 autobiography, he turned to his co-author, Randy Minkoff, and verbalized this narrative never spoken back in the day. “I never thought about diabetes affecting my career,” he said.. “I said, ‘Y’know, Randy, I am so surprised that I put up the numbers I have. I wonder what kind of numbers I would have put up without diabetes. There were plenty of times I couldn’t tell my sugar was low, so all of my faculties were not working 100 percent. You’re a little slower thinking, you have a little slower reactions. I might have played longer too.”

The research of the Fergie book took me to Ron Santo, Jr., the oldest of the Hall of Famer’s three children, who handled his business affairs during his later years and still works on deals using the old man’s good name.

“Lots of times,” Ron, Jr., said of projecting how much better his father’s career might have been either without diabetes, or in better regulation of its symptoms. “My mom (Judy Santo) always said there would have been no telling what numbers he’d put up if not for diabetes. He got fatigued or tried to control its symptoms. He had good days and bad days. Coming from different time zones, it was a big deal to get his sugar back to where it was.”

Santo’s closest call with a diabetic reaction came on Sept. 25, 1968 at Wrigley Field. He had categorized a series of five symptoms that could lead to severe hypoglycemia. One was blurred vision.  As the Cubs rallied in the ninth inning trailing 1-0 against the Dodgers’ Bill Singer with his turn at-bat next,  Santo felt the symptoms onrushing faster than he could get the sugar fix from the dugout. As he batted, he saw three baseballs from Singer. Anxious to get back to the candy bar, he swung at the ball in the middle and slugged a walk-off grand-slam homer. Billy Williams, on first, could not circle the bases fast enough for Santo to adhere to the rules, touch home plate and get his emergency treatment.

In his prime, Santo was a 30-homer, 100-RBI producer. Even with his dreadnought speed, he led the NL with triples with 13 in 1964 while batting .314. He and Williams played in 164 games in 1965, the extra two being tied games played all over again rather than being suspended and resumed, a rule that kicked in during June 1969. Santo apologized to the Left Field Bleacher Bums before the Sept. 5, 1969 game at Wrigley Field for missing the contest with a bad ankle. The mild sprain caused him to sit out the only two games of that season. Otherwise, he only missed a week in 1966 after being beaned under the eye by a pitch, and two months in 1972 with a fractured wrist.

The mere fact Santo assembled the numbers on his record playing in tough conditions with diabetes should have gotten him an express ticket to Cooperstown. With the exception of his beaning season in ’66, he played in 160 or more games each season from 1962 to 1969. Work was offered and Santo was not about to turn it down. Alas, all kinds of politics and grudges always stand in the way of worthy candidates.

Looking at his career, Santo suffered a dropoff starting in 1970 at 30. He drove in 114 runs, but had long periods of under-productivity. He was upset at being bumped down to the No. 7 slot in the order by Leo Durocher, the beginning of the fracturing of their formerly good rapport. From 1971-73, he basically devolved to a 20-homer producer. Santo started off above .300 in the first half of 1973, but a second-half slump to .267 was a big factor in the Cubs’ collapse and failure to win an easy division title in the NL East. He finished with just 77 RBIs despite batting cleanup much of the time.

Santo slugged just five homers — one an inside-the-park job when the Red Sox’s Tommy Harper knocked himself out on the Comiskey Park left-field wall in pursuit — in his forgettable finale season at 34 in ’74. He opted to retire after clashing with Dick Allen and feeling manager Chuck Tanner had lied to him about his role after the trade from the Cubs.

Meanwhile, Williams had his two best seasons at ages 32  (42 homers, 129 RBIs) and 34 (37 homers, .333 average and the NL batting title). Best Santo buddy Glenn Beckert’s top season was at 30 in 1971 with a .342 mark (up to .358 in early August to lead the NL). The evidence is circumstantial, but compelling. Diabetes obviously further speeded up the slowing of Santo’s baseball skill set from 30 onward. 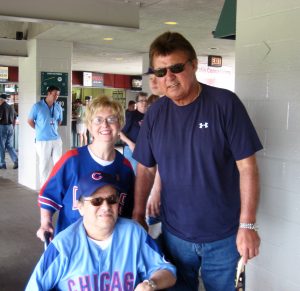 Jan and Wayne (then in a wheelchair) Poledziewski meet Ron Santo on Father’s Day 2009 at Wrigley Field. Wayne, now long using a prosthesis just like Santo, got inspiration from his hero that day.

Santo gave back copiously at 50 and beyond to raised what Ron, Jr. estimated at $60 million to $70 million for diabetes through his annual walks for the Juvenile Diabetes Research Foundation. Just as important, his advice to the stricken got them through the strains of their lives. Even non-diabetics benefited. I arranged for Ron, Sr. to meet lifelong Cubs fans Jan and Wayne Poledziewski on Father’s Day 2009 at Wrigley Field. Wayne had just lost his leg due to complications from an infection, but Ron told him he’d do just fine with a prosthesis. Two years later, Wayne stood on his new leg for an hour to get a front-row glimpse of the dedication of the Ron Santo statue outside Wrigley Field.

Although the family is not longer tied closely to diabetes-benefit walks, Vickie Santo, Ron, Sr.’s second wife, is active in the effort to promote diabetes-monitoring dogs. The canines work in the same manner as those who detect epileptic seizures. Others sniff out cancer. Dogs cannot speak a human language, but have intelligence and sensibilities grossly under-rated by scientific researchers.

Santo had just such a dog — Joker.

“He’d go to Vickie and would be panting and nervously walking,” said Ron, Jr. “She knew it was because my dad was giving off some kind of scent where his sugar was so low. It’s been proven that dogs can be trained to detect (diabetic reactions) before it’s too late.”

In a poignant aside, Joker served his dog “dad” through Ron, Sr.’s passing. Ill himself, Joker died soon afterward. Vickie Santo figured the pooch wanted to re-join his Hall of Famer, wherever.

The Santo name stays in the limelight  in other ways. Ron, Jr. is supervising the introduction of Ron Santo 10 Ale, a new-age beer sold at the Binny’s Beverage chain, for which Joe Maddon is chief spokesman. The ale, produced by a Dallas brewer, is in the process of being introduced into bars around Wrigley Field.

I won’t quaff Ron Santo 10 Ale as a very rare imbiber. But I’ll find something else to drink to the continuing benefit to diabetes research — and the fact one of the most colorful Cubs of all time was held back only by Mother Nature and medical advances.