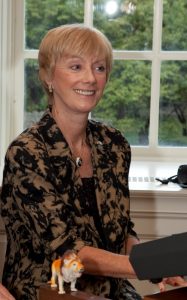 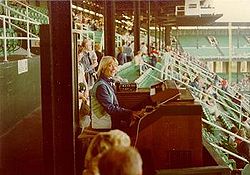 It’s always great to be remembered,” Faust said. “You like to think you made a difference in people’s lives. I am most humbled and pinch myself to have had the career I did. I feel fortunate my life took me in the direction it did. If I had any notoriety, it’s because I’m a good musician. Hopefully my fingers spoke for themselves.

Now ballpark organists play second fiddle to players’ recorded, personally-requested “walkup music.” Before that “modernization” of the game, Faust and her fellow organists like the Cubs’ Gary Pressy (an ironman having not missed a game since he was hired in 1987) figured out the matchup between player and music. If you paid attention, you could tell which organist and which ballpark just by tuning in a game — none were copycats.

“I never planned for games, and I wanted to be spontaneous enough,”  Faust said. “You hear a name and match a song on the spur of the moment.

Faust even donated her home practice organ —-The Hammond Elegante Model 340100—complete with original bench and owner’s manual—to White Sox Charities and in December 2015  it sold for $1,400 to Josh Kantor, who’s been the Boston Red Sox organist since 2003 and grew up as a fan of Faust.

Give Faust even more credit for breaking another barrier in the firm man’s world of baseball of 1970. Top Sox official Stu Holcomb hired the Chicago Roosevelt High alum right out of North Park University. “When I was hired, there was a petition this was the wrong place for a woman,” Faust recalled.  In 1972, Holcomb physically removed sportswriter Linda Morstadt from the pressbox. But Faust was so good, so young, she couldn’t be touched.

“Most organists read music. I didn’t,” she said. “Other organists had greater degrees, but I had the ear (for music).”

Veeck was more progressive, thank goodness. He noticed Caray had sung to himself in the seventh inning. Veeck piped Caray’s voice over the PA system with Faust’s accompaniment in 1977.

“Thankfully, I was in eye contact with Harry,” Faust said of her organ loft, by then re-located to the Comiskey Park upper deck left of the broadcast booth. “Harry probably sang more in cadence with me.” 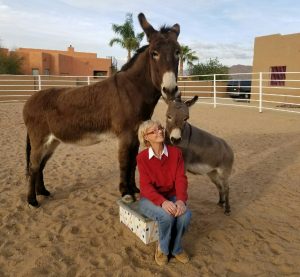 She couldn’t stop the flood of humanity that engulfed the field for Disco Demolition on July 12, 1979. Faust does admit to revving up what was essentially a riotous rock concert.

“I was encouraging chants (‘Disco Sucks’) til’ it  got out of hand. “Steve (Dahl) planned to have me play for him, ‘Do You Think I’m Sexy?’  But I never played it.”

Old Comiskey Park had other benefits for Faust. Son Eric, now 35 and a percussion purveyor in his spare time, took his first steps in center-field as part of an employee picnic. She got Mandy as part of a promotion where the door prize was a swayback donkey. Ron Kittle gave her a baby chick. Faust persuaded management to abandon setting off fireworks during their Dog Day promotion since similar explosions on July 4 scared some canines.

More recently, Faust acquired the diminutive Gigi as a companion for the older Mandy. The established donkey is set in her ways, but tolerates Gigi.

No one is suggesting the four-legged friends attend the induction ceremony in Pasadena. But the idea is so logical for The Baseball Reliquary. Obtain an organ — surely there are a few in the LA area — and let Faust play “Take Me Out to the Ballgame” at her own enshrinement.” She had the perfect talent for player or entertainer:

“I had the ability to capitalize on the moment.”  That she did…

Now, the legendary Nancy Faust, who provided the soundtrack to our summers playing at White Sox games for 41 seasons before she finally retired in 2010, gets some national attention. She fittingly belongs in The Shrine of Eternals.