I wish time travel worked in real life to go back to a favorite Cubs home opener.

I’d beam back to 1978 Omaha and invite the teen-age Tom Ricketts to cut high school and fly to Chicago for one day to attend a Cubs home opener. 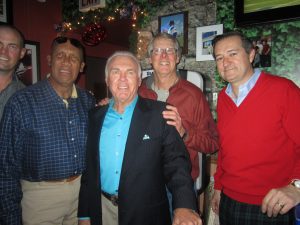 Tom Ricketts (right) would have had a different perspective on the mob scene at Wrigley Field had he been old enough to attend SRO games played by (from left) Fergie Jenkins, Randy Hundley and Rich Nye — and the record-busting 1978 home opener.

Ricketts would understand the Cubs’ fan mentality even better, get at its roots, than on his 21st century daily excursions all around Wrigley Field to chat with paying (a lot) customers dressed in team garb, enjoying their once- or twice-annual outing as if it were a rock concert.

If Ricketts had grown up in Chicago, he’d have discovered the old-school way of going to Clark and Addison — wake up in the morning and on the spur of the moment  decide to go to the game. And on Opening Day, arise even earlier — maybe before the cows got milked — to get in block-long lines for bleacher seats.

For the last 40 years, fans have had to make their Opening Day commitments during the winter, buying seats in advance. The play-by-play of the home opener on Friday, April 14,1978 prompted the Cubs to never sell bleacher seats on the day-of-the-game for openers going forward. Reason? Oh, the humanity!

Packing Wrigley Field for the opener had become fashionable starting in 1968, when more than 33,000, largest opener crowd since 1946, showed up on a dreary Saturday to watch the arch-rival Cardinals win. Prior to that “lid-lifter,” as Vince Lloyd called the first home game, openers in the post-war era were not that big a deal, drawing around 15,000, double the typical weekday count in that era. Cementing the tradition of playing hooky from school or work was the most famous opener of ’em all — Willie Smith’s 11th-inning walkoff homer on April 8, 1969. More than 40,000 witnessed that seminal event  with at least 4,000 to 5,000 standing.

As early as 1968, the Cubs apparently sold more than 5,000 standing-room-only ticket for some games before reluctantly cutting off sales within an hour of the first pitch. In several instances, between 10,000 and 20,000 were turned away.  Ballpark capacity was in the 36,000-range, increased  to slightly more than 37,000 in the 1970s.

On July 28, 1968, more than 42,000 jammed the place to see a Cubs doubleheader sweep of the Dodgers. With demand heavy in 1969, ballpark operations chief Salty Saltwell and his ticket folks allowed SRO tickets to go fast with three games after the opener exceeding the 41,000 mark, including Ken Holtzman’s no-hitter on Aug. 19.  Later, in 1971, an August Sunday doubleheader against the Giants drew a shade more than 43,000 — concessions ran out by the time vendors reached my upper-deck seat in right — while a July 1, 1973 Sunday twin bill with the Mets packed in 42,497.

The infamous bleacher basket was constructed not because of repeated Bleacher Bums’ incursions onto the field in 1969, but due to an anti-Vietnam War group’s dash onto the field after the last out of the 1970 home opener. Several players suffered near-assaults. Enough was enough in the Cubs’ eyes. The basket, adopted from old Busch Stadium in St. Louis, was erected on the next road trip.

But 1978 will forever hold the opener record, much the same as Fergie Jenkins’ six consecutive 20-win seasons during the SRO rush will stand the test of time.

I blew off senior-year classes at Northern Illinois University — should have blown off the school and its cliquish student newspaper, too, if I had to do it over again — and arrived in the Wrigley Field bleacher line at 6:30 a.m. Already block-long queues had formed, one almost to Clark Street along Waveland, another extending back to Addison along Sheffield. The huge throng was partially attracted by the prospect of competitive Cubs baseball, after the team had held first place from late May through early August in 1977 before staging perhaps the worst final two-months  pratfall in team history.

Sensing trouble unless they relieved the pressure of the anxious lines, the Cubs actually opened the bleacher gates at 8 a.m. —  5 1/2 hours before first pitch against the Pittsburgh Pirates. As a true Chicagoan, I looked for an angle amid the tumult. The mob began pushing and shoving by the gates. I slipped into the chaos to see if I could get in to claim my accustomed seat. I was literally pushed through the gate as I paid my $1.50. 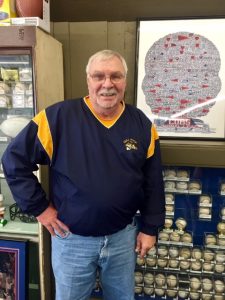 In a calmer moment than the 1978 home opener, Larry Biittner enjoys a recent autograph appearance at AU Sports in Morton Grove, IL.

The bleachers filled up within an hour. So what did nearly 4,000 fans do when they have to wait longer than the actual length of a game? They drank, and drank some more. Food fights erupted with edibles tossed between left and right fields. One fan climbed into the vacant center-field area before being apprehended by the gendarmes.

The Cubs had sold far more tickets than seats. Fans were encamped in the bleachers aisles and on laps, anywhere a seat, legal or not, could be had. When the final count of 45,777 was announced, likely rivaling the estimated crowds for 1929- and 1930-vintage openers, the math stated about 8,000 people got in via SRO tickets.

An extra-inning game would have been disastrous given the condition of the mob. But Larry Biittner unleashed one of his three best Cubs moments — another being losing the ball in his hat in right field — with a walk-off homer against Pirates reliever Jim Bibby in the ninth as the Cubs eked it out 5-4.

Leaving the ballpark, I was stunned to see piles of jackets and sweatshirts left inside and outside the bleacher gates from the early-morning waits. John Husar noted the left-behinds in a Chicago Tribune story. The disgarded garments could have clothed a homeless shelter.

Even though the Wrigley family owned the Cubs for three more Opening Days, never again were seats sold on the day of the game nor so many SRO tickets made available. Tribune Company further cut down on the SRO tickets. As the actual seating capacity crept up in the Harry Caray era, rarely did crowds exceed the 40,000 mark. Only in the last decade, as actual capacity has been pushed to 40,000-plus, have the gates typically been recorded in that range. That’s how the Cubs in a small ballpark can count as many as 3.3 million annual attendance.

Looking back, it proved a hassle navigating a grossly overcrowded Wrigley Field. Having a ticket and reserved seat in hand is easy on the mind while hard on the pocketbook. Still, something is lost with the spontaneity of getting to the ballpark early to make sure you get in, and grab your favorite seat.