Throw any superlative out there. All apply to Albert Almora, Jr.’s defensive skills in center field.

Almora Jr.’s glovework at his position is the best I’ve witnessed in five decades watching the Cubs.

Better than Brock Davis turning on a final burst of speed to make up for a slow jump, finally engaging in a sprawling, diving catch in Wrigley Field.

Better than “Tarzan” Joe Wallis playing shallow, then going back…back…back…back and hopefully not running out of room before he hits the ivy and unforgiving bricks behind the foliage.

Better than Gentleman Jim Hickman, his spirit willing but the legs a bit too heavy, trying to flag down a Jay Alou triple picking up speed on the artificial turf in the right-center gap in the Astrodome.

A stereotype used to be floated that one did not needed a truly great defensive center fielder in cozy Wrigley Field. Oh, yes you did. You need a good one anywhere, including old Thillens Stadium. Someone athletically gifted. Definitely a take-charge, smart guy. And someone who craves mastering the position rather than marking time or having doubts because the Cubs needed another bat in the lineup, sacrificing some defense in the process.

Almora’s arrival was welcomed. Now if he can prove beyond a shadow of a doubt he can hit tough righties, he’ll be a lock for years to come, and one of the best in baseball.

He doesn’t look like he’s laboring when he makes a sensational catch, such as the moment the other week when he almost effortlessly drifted back and in one motion leaped to steal a Tyler Flowers homer over the fence in Atlanta. That’s the standard you see from Almora, Jr., and the standard he expects from himself.

Almora, Jr. legitimately talks a great game. He is pleasant and welcoming. The other day he spoke on sports-talk radio of his love of deep-sea fishing in his native Miami, prompted by his father’s gig as a commercial fisherman. He was an easy conversationalist when we checked him out as a 19-year-old Class A player at Kane County in 2013, just a year after he ranked as the first No. 1 draft pick of the Theo Epstein regime. His words then apply to his striving now to lock down the regular’s job in center.

“I want to be a player known as going hard every day,” summed up Almora then. “You can’t have four hits every day. It ’s a sport of failure. But you can control how you play and your actions, and that’s what I want to be known for.”

A great defensive center fielder should be a true ball hawk. He should not be straining every last bit of sinew to race to meet the ball in the gap, above the wall or sinking in front of him. Willie Mays and Curt Flood had that extra sixth-sense. I believe Almora, Jr. is cut from the same cloth — take off in stride the moment the ball is hit, and smoothly arrive at its descent point.

The position requires more than just raw speed. I mention the 1970-71 vintage Davis above.  An original Houston Astro, Davis got some renown as a four-month Cubs regular in ’71 making those diving catches and exciting Jack Brickhouse on the call. But I believe if he had Almora Jr.’s gifts, Davis would have lasted a lot longer in the majors. Fastest man on the Cubs? Davis was 0-for-6 stealing bases in ’71. 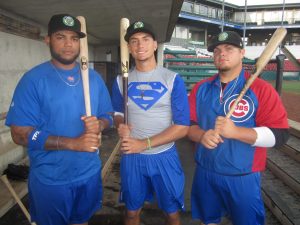 Albert Almora, Jr., predicting his future with a Superman shirt, was flanked by Rock Shoulders (left) and Dan Vogelbach (right) at Kane County in 2013.

Wallis, pride of Southern Illinois University-Edwardsville, had his 15 minutes of fame in 1976. Regarded as a great outfield prospect, he actually pushed defensively-competent Rick Monday to first base for the last two months of the 87-loss ’76 season. He’d make some artificially-brilliant catches running straight back from his shallow positioning. WGN thought it would have some fun, so with its game-coverage TK-44 camera taped Wallis running backwards till he ran out of room at the vines. A WGN film crew, then set up atop the bleachers, then caught Wallis, still in his No. 28 uniform, continuing his jaunt across Waveland Avenue  ’til he caught the ball. The two segments were spliced together with Tarzan’s yodeling as its audio backdrop.

Problem was, Wallis couldn’t hit enough to stay a regular, and eventually was palmed off in 1978 on the Oakland Athletics in one of many trades A’s owner Charlie Finley concocted with the Cubs.

When they finally got ahold of Jim Edmonds to play center in 2008, the longtime Cubs nemesis was near the end of the line.

I joked with Terry Francona, a brief Cubs extra man as a sore-kneed pinch hitter and first baseman in 1986, that he’d draw center-field duty. Francona laughed. One day he found himself playing center between Gary Matthews, Sr. in left and Keith Moreland in right. Run, Tito, run!

But after all this time, Almora, Jr., plugs all gaps, on the field and in the depth chart. Good things should happen to good people. He just needs to go on a hitting tear, and cannot be denied from that point forward.