Joe Maddon obviously had the deciding vote in the departures of three key coaches.

The new championship era provides a platform for some unprecedented Cubbie Occurrences, of the type Sweet Lou Piniella, coiner of the latter phrase, never envisioned.

Latest is the cashiering of three of Joe Maddon’s four top coaches in the wake of a 92-victory, NLCS-worthy season.

Never in the often-tortured postseason Cubs history have the hitting, pitching and third-base coaches been given the gate in the immediate aftermath of October baseball.

Field staffs are usually swept out with manager’s firings, as the coaches are typically tied in with the skipper, moving from team to team. Similar hiring/firing patterns are seen in sports media jobs.

Rare is the coach who spans five different managers, as former Cubs pitching coach Larry Rothschild did in a nine-season run under Don Baylor, Bruce Kimm, Dusty Baker, Piniella and Mike Quade. Rothschild was privately uncomfortable when Baker imported Dick Pole, his favorite pitching guru, in 2003 to work under Rothschild. Interestingly, Pole was Cubs pitching coach when Greg Maddux first became a big winner in 1988-89. And yet Rothschild somehow lasted the entire length of Baker’s tenure – surviving the crippling injuries to Kerry Wood and Mark Prior – and was still on the job in Aug. 2010 when Piniella retired before his contract’s end.

The firings of Bosio, Northwest Indiana resident John Mallee and Gary Jones is yet another indication of the new sabermetrics era in which blame is cast if exact performance is not achieved by the proscribed numbers from the numbers crunchers upstairs. 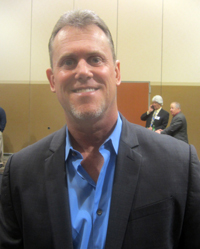 John Mallee achieved his dream of coaching in his home town, but took the fall for key hitters’ regressions or plateaus.

Big boss Theo Epstein, the house intellectual, and the down-to-earth chief deputy Jed Hoyer have stated improvement for young players and overall teams cannot be linear. Too much of the human factor and the unpredictability of the game itself get in the way. Yet the coaching firings, beyond whatever inside politics was at work involving the outwardly affable Maddon, seem tied to either regression or (for now) a temporary plateau by the youthful Cubs who comprised the 2016 champions.

Remember, the Cubs were maddingly inconsistent in a 43-45 first half, the pitching in particular wobbly. Fits of control problems plagued the staff from start to NLCS finish. Bosio was the obvious fall guy for the pitching regression. All the while, Epstein-Hoyer still failed to produce a home-grown impact pitcher to give the staff the needed boost.

Despite a record six Cubs with 20 or more homers, the hitters were less patient, less “grinding” than in the championship season. Epstein-Hoyer brought over their blueprint for drawn-out at-bats and the resulting long games from Boston. Only the long games prevailed in 2017. Kyle Schwarber’s sub-Mendoza line first half, Addison Russell’s poor start (coinciding with personal problems) and Javy Baez’s continuing hit-or-miss style led the list of debits. Meanwhile, Kris Bryant failed to achieve elite hitter status to which his first two seasons as rookie of the year and MVP pointed. Thus Mallee had to walk the plank.

But in the semi-confusing explanations of the firings by the brass, experienced Cubs watchers knew to carefully read the tea leaves. In particular, the desire for a new “voice” to replace Bosio was particularly telling.

Bosio lasted three years under Maddon, with spectacular developments like Jake Arrieta’s emergence into (semi-briefly) an ace and Kyle Hendrick’s Maddux-ian mastery of control. But references to “voice” seem two-fold: increasing differences between the outwardly rough-hewn Bosio and mature hipster Maddon, and the pitching coach’s frequent media exposures. No other Cubs coach under a controlling Epstein was on the air as much as Bosio on AM 670-The Score between pre-game show spots and regular gigs on Mully and Hanley’s morning show. Bosio had elements of candor amid the usual baseball clichés.

Third-base coach Jones was not noted, a la the late “Wavin’ Wendell” Kim, for sending baserunners steaming into outs at home. His departure could be tied to his pre-game instructional duties showing up in the previously-mentioned player debits.

The Cubs also have a disheartening habit of dumping field talent whenever a favored manager or coach becomes available. Epstein was famous for launching a perfectly fine Renteria after just one year when Maddon became available due to the fine print of his Tampa Bay Rays contract. Longtime Maddon pitching-coach lieutenant Jim Hickey oddly departed his Rays job, as if he was tipped off he might have an opportunity to re-join his old boss. The Cubs certainly did not interview other candidates than Hickey for Bosio’s position.

One other factor seems to have filtered into the equation. The trio of firings gives Epstein-Hoyer a bit of cover as more of Maddon’s weaknesses as a postseason game strategist were displayed.

Maddon is a supreme player motivator, the first top Cubs official to provide needed extra second-half rest amid baseball’s toughest playing conditions and an engaging press-conference entertainer. But two consecutive postseasons of oddball, and potentially disastrous, handling of pitchers have rankled the fans and raised eyebrows. Lineups involving a grossly-miscast leadoff man in Schwarber and a significantly under-used Albert Almora in center field also provide more of a long-term scouting profile of Maddon the strategist compared to his days in small-market Tampa Bay.

If Cubs watchers had not believed the politics of the game – ranked above politics itself and below the ultimate jungle in sports media – were at work in their revived franchise, they now know better. With success comes a human cost. If you love the game, baseball will not generally love you back.