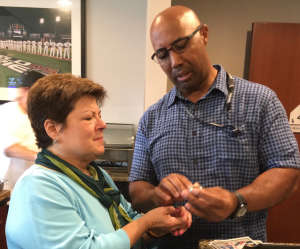 Smith and Baines were both recruited from off-the-main-road small towns by fellow Hall of Famers. Buck O’Neil found Big Lee in tiny Castor, La., making him the No. 2 Cubs draft choice in 1975. Bill Veeck himself discovered Baines in Easton, Md., on the state’s quaint Eastern Shore where Baseball’s Barnum had established his getaway home. Harold was picked No. 1 by the Sox in the 1977 draft.

Break-ins on tail-ending teams in ‘80

Both players broke into the majors in the same season with little ballyhoo on tail-ending teams that reached or surpassed the 90-loss mark.

Baines arrived first, on April 10, 1980, for young manager Tony La Russa’s 70-90 Sox. Smith pitched as soon as the last-month callups arrived, in the fifth inning on Sept. 1, 1980 at Wrigley Field. He must have shaken his head in worry looking back at his outfield of three first baseman – Bill Buckner in left, Scot Thompson in center and Larry Biittner in right – for  rookie skipper Joey Amalfitano’s 64-98 Cubs. Despite the brush with 100 defeats and slapdash play, the ’80 Cubs used only 12 pitchers overall, so Big Lee had plenty of September-October work, appearing in 18 games.

Baines and Smith should have been voted in by writers. But neither was considered a superstar or impact player at their position. Critics suggested they were members of the “Hall of the Very Good” rather than the elite ranking in Cooperstown.

Smith’s 478 career saves were a baseball record while he was eligible for the writer’s vote, but he lost steam annually after a promising start in balloting. Baines had 2,866 hits, just a season-worth of production short of the benchmark 3,000 (Baines did lose out a chance to get 3000 hits due to MLB work stoppages in 1981, 1994, and 1995. But his peak homer and RBI totals were 29 and 113, respectively, not attaining superstar status. He spent the last three-fifths of his career as primarily a designated hitter, which wins few votes from persnickety scribes. 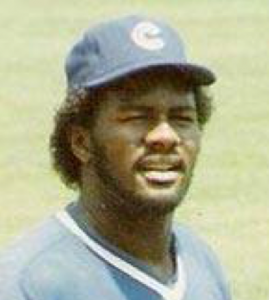 Both were dispatched from their original teams in trades by GM’s who could not be classified at all as backers.

Smith in particular was rushed out of town at the 1987 winter meetings by new Cubs GM Jim Frey, who had spent the previous season as WGN-Radio color analyst, witnessing Smith’s verbally sour clubhouse mood. Frey, who had previously managed Smith for 2 ½ seasons as a Cub, grabbed practically the first two Red Sox that Boston GM Lou Gorman had offered – pitchers Calvin Schiradli and Al Nipper.

Baines was sent to the Texas Rangers on July 29, 1989 as part of Sox GM Larry Himes’ rebuilding program. Himes could not figure out why Sox fans frequently chanted “Harold! Harold!” when he came to bat, and mockingly repeated the chant. The return for Baines included a leanly-muscled, fast 20-year-old outfielder named Sammy “The Panther” Sosa (President George W Bush, when he was the one of the owners of the Texas Rangers, had approved the deal with the White Sox and during the 2000 Presidential debate with Al Gore cited that trade as his biggest mistake).

At least Baines made it as far as the World Series with eight plate appearances for the 1990 Athletics. Smith pitched in just two post-seasons and was infamous for serving up Steve Garvey’s walkoff homer in San Diego in Game 4 of the 1984 NLDS that turned momentum against the favored Cubs. Pitching for seven teams in his post-Cubs days also did not help Smith’s cause with the writers. The image of a wandering reliever does not promote the concept of Hall of Fame dominance.

Going back home where they belong

Through all their career twists and turns, Smith and Baines are where they are supposed to be. They were Hall of Fame-worthy with consistency, longevity and production. And they are honored by their original teams.

Smith received an alumni World Series ring from the Cubs. He frequently appears at the Cubs Convention and Wrigley Field, the latter during a break from pitching coach duties. He also is frequently back in town for autograph appearances. Baines earned the biggest backer in the Sox Universe in chairman Jerry Reinsdorf, and thus logged two more stints on the South Side, finishing his career as a Sox in 2001.

I’ve seen the several sides of Smith. I had to practically throw split-fingers and knuckleballs to then-agent Brian David to line up a sit-down interview with Big Lee in the Wrigley Field dugout on Opening Day 1987. He was friendly enough, but plenty of unprintable vituperation followed amid a 36-save season. Later, any session with Smith during or after his career generated laughter. Fergie Jenkins is a good buddy. Todd Hundley once recalled how as a 10-year-old in 1979 in Double-A Midland he caught the young, somewhat wild Smith to conquer his own fear of the baseball while tagging along with manager-father Randy Hundley.

I got to know Baines a little better when he was on the Sox coaching staff in this decade. He was good conversationally, but I did not have to ask him to provide tape. One could see he was comfortably at home back on the South Side, and a permanent part of the franchise no matter what role he served each year.

In a September 2017 interview, Baines, who was the most loquacious we have ever encountered, said to CBM President David Fletcher:” I wasn’t sure I would be No. 1 (draft choice) because I thought the Sox would take (pitcher Bill) Gullickson.”

He admitted a year ago that he did believe his chances for Cooperstown were that good.

“It wasn’t meant to be,” said Baines, the traditionally quiet, dignified man, who is still proud of his long 22-year MLB career and his 2005 World Series ring when he was the bench coach for Ozzie Gullien, his Sox teammate for many years.

Baines suffered a right knee injury during the last week of the 1986 season, leading to multiple surgeries and eventually a right-knee replacement.

Fool’s gold for Sox, any team to tank season to snare No. 1 draft pick

Challenges abound for both players to deliver their induction speech in July. How can Smith keep it G-rated? How can Baines do public speaking for five to 10 minutes?

In the end, that’s the least of their worries. Smith and Baines made it after detours. Many Hall of Fame-worthy candidates can’t make the same claim.