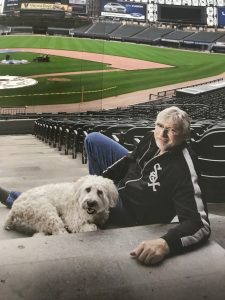 How? Well, Kittle is a noted dawnbuster. He’d have been long wide awake and rarin’ to talk if Orion Samuelson had tapped him to co-host the 5:30 a.m. “It’s Milking Time” on WGN-Radio back in the day.

“You don’t sleep, you can do that,” Kittle explained of his ambassadorial method of response to well-wishers.

Harley’s story got even more play on WBBM-TV’s 5 p.m. news on May 7. Kittle recounted a dog’s life, as Harley deserved, instead of emphasizing his death. 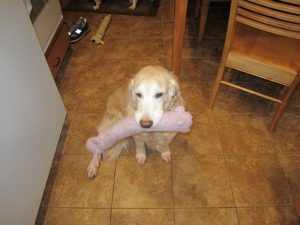 Petite Polly in 2012 doing what a golden retriever does best — besides eating.

Harley went with Kittle on his road trips, piling up tens of thousands of miles as his sidekick. He often went in tandem with Pops to G-Rate Field in their own special “dog day.” At Kittle’s side, Harley Pooch won over even nervous non-dog lovers.

“He brought happiness to everybody, not just me,” he said. “If you don’t like my dog, you don’t like me. He was a special thing. I took him everywhere, and not one time did I have anybody not say nice things about him.”

Interestingly, the WBBM segment aired close to yet another broadcast of a long-running bank commercial focusing on an inventive woman who constructs prostheses for all kinds of animals. The closing scene had a dog, obviously hampered on its back legs, chasing after a ball using an attached two-wheeled cart.

“I would have had the best cart on the planet for Harley,” said Kittle. He has proved almost more dexterous with his hands constructing his famed “bat benches” — furniture and wood sculptures made of real bats — at his southwest suburban shop than swinging a war club for Tony La Russa 35 years ago.

But Harley was in too much pain to be fitted with a home-made cart. Kittle dutifully carried him around and stayed up most of the night comforting the suffering dog.

You’d do the same for your dog. Similarly-handy friend Stan Muench constructed a ramp in 2012 for our  golden retriever Polly when a spinal condition hindered her walking. The ramp extended from our deck to the back yard, so Polly did not have to navigate four stairs. 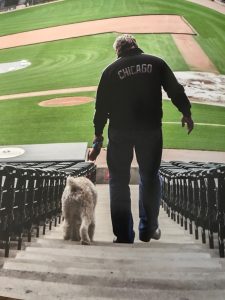 A boy and his dog is an eternal story.

But she only used the ramp a few months. One early Sunday evening in 2013, I came home from covering a Blackhawks game when we saw Polly could not get up and walk. Retrievers always are chow hounds, even stealing loaves of bread if they can reach them in a counter top. The heartbreaking part was Polly had not lost her appetite. She crawled on her belly to her food bowl. That would be her last meal. I had to immediately take her to the emergency vet clinic, losing her at age 11.

Kittle is the underrated third wheel in Sox history doubling in animal rescue. La Russa and Mark Buehrle were noted for publicly backing and even funding animal shelters. Back in Gary, Kittle and his family took in strays all the time.

“There was a baseball field across the street, and people dumped their dogs there all the time,” he recalled. “One day I was walking along, picking up empty pop bottles to get the 5 cents for the return of each. I saw a box — this is well before you were cautious touching a box — and there were six puppies in there.” The Kittle family and friends made sure every pup found a home.

Harley Pooch will not truly be gone since Kittle will always talk about him, and people they touched will talk about Harley. He’ll hear about Harley from boss Jerry Reinsdorf, whom Kittle said has seven dogs himself. Harley’s story would surely make a great children’s book.

And the moral of his story?

“You’ve got to think of the quality of life for your pet,” said Kittle of an owner’s dilemma when sickness and old age overwhelms the beloved one. “It’s in his best interests. You’ve got to make the decision for him.