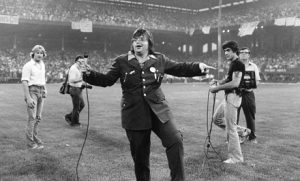 But early in its lifetime under the new call-letters, having hired a 24-year-old character named Dahl as its morning man, WLUP put itself on the map by sponsoring “Disco Demolition Night,” the most outlandish promotion in baseball history, at old Comiskey Park.

Disco was pushing up against rock purists in a strong way in the late 1970s. Even mainstream rockers were releasing disco records. Dahl decided to push back in a way only he could — via a massive public spectacle. With White Sox marketing chief Mike Veeck’s support, WLUP and Dahl scheduled a “Disco Demolition NIght” in between games of a twi-night White Sox-Detroit Tigers doubleheader on Thursday, July 12, 1979. Dahl would blow up disco records on the field. His listeners were encouraged to bring a disco record to the ballpark. If they showed the platter to ticket takers, they’d be admitted for just 98 cents — almost matching WLUP’s frequency.

The promotion succeeded beyond anyone’s wildest dreams. The Bill Veeck-owned sagging Sox, managed by ex-Cub Don Kessinger, badly needed a big crowd, but they got a rock concert attendance instead. Some estimate as many as 60,000 to 70,000 crammed into the crumbling, 69-year-old ballpark. Kessinger told the CBM:”It was the best f–king promotion in baseball history.”

The smell of cannabis was rife in the air. When Dahl, dressed in military fatigues and helmet, took the field with WLUP female mascot Lorelei between games, he barely opened his mouth and set the records aflame when much of the crowd poured out onto the field.

Pleas by Veeck and broadcaster Harry Caray to clear the field went for naught. Chicago police eventually cleared the field, but not before umpires had to cancel the second game and forfeit it to the Tigers, as if the Sox needed another loss. “Sodfather” Roger Bossard spent much of the rest of the season trying to patch the damaged outfield, where he found marijuana seedlings. For the moment, Mike Veeck’s baseball promotional career was on hold because he was blamed for what say as a fiasco.

But Dahl and WLUP were big winners. The voluble deejay was now a heavyweight in more ways than one in Chicago, able to play in the same ratings outfield as long-established Wally Phillips and NewsRadio 78 (WBBM). Still on the air on WLS-AM in afternoon drive-time, Dahl carved a nearly four-decade career out of Disco Demolition’s afterglow.

FM radio was in its ascendancy with WLUP the leading indicator. Within the next decade, many longtime “full service” powerhouse AM stations had to change their formats with the better fidelity on the FM band luring music-loving listeners. With a host of FM rock competitors, WLS-AM gave up its own music format in favor of talk in 1989, after 29 years.

FM rockers even fielded news departments in the era, and their mic jockeys showed up regularly to cover Chicago sports events. The legendary Red Mottlow was one of that bunch, working for WFYR-FM in Chicago in the 1980s. The entire back row of pressboxes became “radio row.” Sadly, they were canaries in the coal mine for the steady cut in baseball coverage that is not acknowledged by team public relations officials. De-regulation in the radio business in the 1990s persuaded FM station managers they did not have to allocate payroll to satisfy public-service requirements by maintaining news departments. The mic jockeys steadily disappeared, leaving only the largest AM news-talk or team rights holders to cover games. 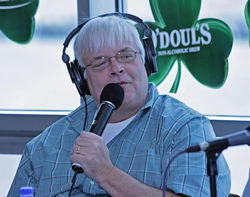 Steve Dahl as an elder statesman in radio. Photo via Jauerback https://en.wikipedia.org/wiki/User:Jauerback

Meanwhile, Dahl was at the tail end of deejays’ huge influence on audiences, in which the personality could bring out a big crowd at a live event. Researching Fergie Jenkins’ upcoming book on the 1969 Cubs, I found a Sept. 5, 1969 promotion by legendary morning man Clark Weber, who had just shifted from WLS-AM in its Top 40 prime to rival WCFL-AM. Weber promoted a ‘”turn-in-your-bra” day at the dawn of “women’s liberation.” Titillated by the concept, several thousand guys showed up at the lunch hour, crowding the State-Wacker intersection. Scores more took up vantage points eight floors high on the Marina City garage across the Chicago River. Only a handful of women turned in their bras, and two were cited for pollution dumping the undergarments into the river. But the result was achieved — a crowd, and publicity for the deejay and station.

Given the only constant in broadcasting is change, sudden and unexpected, WLUP’s 41-year-run as a rocker busted the actuarial tables in the business. But Dahl and Disco Demolition really became the station’s touchstone, its launching point for a long-term identity.

If you remember the summer of ’79, you’ll think of Disco Demolition. Researching the headlines, you’ll also notice the energy crisis, and President Jimmy Carter hanging crepe, forecasting a recession and lecturing the country about its moral failings. The Sox finished in the American League’s nether regions, not after hiring a new manager named Tony LaRussa within a few weeks after Disco Demolition when Kessinger abruptly quit, and a contending Cubs team managed by gruff Herman Franks thoroughly went south from the final days of August ’til season’s end. What would you prefer to experience?

The Elmhurst History Museum had a special Disco Demolition exhibit that ended in December 2017 that honored this unique and lasting slice of Chicago baseball history. The exhibit featured a treasure trove of period-piece items that included stuff pulled from protagonist Steve Dahl’s storage locker.  It recreated the experience of vintage radios and TVs that conveyed the Disco Demolition story step-by-step forever connecting Chicago White Sox baseball to the late WLUP.

A lot of folks mourned WLUP’s format passing on social media. They focused on rock memories. Well, someone has to mention Disco Demolition as part of the station’s history. Consider it done.