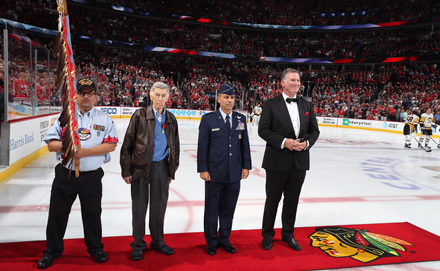 After Jim Cornelison delivered the last note of the National Anthem and the last gesture toward the flag, after the last 90-decibel fans’ roar abated, John McDonough provided the best tribute to Herman Sitrick humanly possible to an intimate gathering in a United Center suite.

Blackhawks president McDonough, of course, was behind the largest public ceremony to date honoring stunning World War II hero Sitrick, 92, his old partner in successfully promoting the Chicago Cubs through what McDonough recalled were numerous seasons of 85 to 97 losses. Former Cubs chief adman Sitrick’s story of singlehandedly capturing 21 German prisoners during the Battle of the Bulge on the cusp of 1945 had earned him Opening Night serviceman’s honors before the Hawks’ record-breaking season opener.

But whatever similar honors the Cubs can concoct after Sitrick’s Wrigley Field date on Sept. 10 was postponed during illness, whenever the Pentagon gets around to recognizing Sitrick’s Sergeant York-type actions 70-something years later, none will compare to McDonough’s ad-libbed toast to four generations of the Sitrick family and an astounded wandering sports historian. 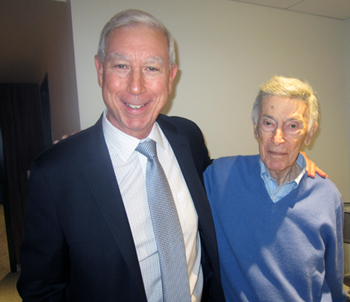 Blackhawks President John McDonough (left) delivered a touching tribute to Herman Sitrick when he stopped in the suite during the second period.

Almost always cool, calm, collected and composed meeting fans and media through decades spearheading Cubs marketing and now running the Hawks, McDonough cracked a bit. Tears began to well up in his eyes twice when reciting what Sitrick meant to him.

“I’ve been around three teams that have won Stanley Cups, we’ve sold out the United Center nine years in a row, (but) nothing will ever top my experience and the time I’ve spent with Herman Sitrick,” McDonough said. “I’ve missed him a great deal. There’s nobody who has a larger impact and more profound (voice cracking) impact on my life than Herman.

“I miss you so much. I’m so proud (halting again) that you were down on the ice. We should have done this sooner, but I’m happy it happened. Jillian (Smith, executive operations staffer) hears me talking about you all the time. And I think this is a great lesson for all of you who get too busy in your life, that don’t take the time to call somebody you love, who has done so much to help you in your life, this has made my life tonight, Herman. Great to see you!”

In a voice reduced almost to a whisper due to the recent illness, in which family members worked him back into shape to go on the ice for the opener, Sitrick proudly sung the National Anthem along with Cornelison. Back in the Ardennes, such a 21st century sight of lights and colors and noise and electronics might have been right out of Buck Rogers for the shivering GI.

Despite creeping frostbite on his own feet, Sitrick kept his head, with extreme bravery, by repeatedly gesturing with his eight-shot M-1 rifle to Germans surrendering by the ones and twos to take shelter in a half-destroyed farmhouse. Sitrick luckily within a half day could foist the ad-hoc enemy platoon into the possession of George Patton’s armored columns coming to the relief of battered U.S. units.

Sitrick obeyed three sets of laws while fanatical SS troops nearby were committing en masse their worst atrocities against American POWs of the war. He upheld the Geneva Convention, Army rules and above all “tikkun olam,” a Jewish mandate to repair the world. No wonder hundreds of thousands of Germans in the coming months through V-E Day strained at the bit to surrender to GIs like Sitrick, getting as far away as possible from the revenge-seeking Soviets. Giving up to the largely fair-play Americans meant life after the war to these pawns of a ranting madman instead of a Siberian labor camp or worse. Sitrick’s own first prisoner pleaded for his life in German, pleaded that he had three children back home.

Sitrick tried to put war behind him

The soft-spoken Sitrick, a native of Davenport, Iowa, went on like millions of veterans to marry, start a family and career, and attempt to leave their wartime nightmares behind. Emphasize “attempt.” Having been wounded four times prior to the POW incident and losing scores of fellow company members, Sitrick suffered terrible dreams that only wife Marcia confirmed as he woke up in a sweat. In 1945 this was called “combat fatigue.” Now it’s properly diagnosed as post-traumatic stress syndrome (PTSD).

Through a quirky set of circumstances, the Army did not honor Sitrick and inquiring correspondents missed a chance to interview him while he was being treated for the frostbite back in the rear. He only let out his story in drips and drabs to his family before the unbelievable tale of heroism was filtered by other veterans to the French. Sitrick was honored with France highest award for a foreigner. And then those who worked with him over the years, as McDonough did with the pro soccer team Sting before 25 years with the Cubs as Sitrick ran his own ad agency, found out his story. He never bothered his comrades with his old feats or troubles via the ultimate tale of a modest man.

“It was a dream,” McDonough said of watching the Sitrick ceremony he enthusiastically green-lighted. “I was not (previously) aware of his bravery and his heroism and all he accomplished.

“He is consistent. He doesn’t talk about himself. He likes to talk about other people. But I’m not surprised. It’s dignity, it’s humility, class and everything I’ve learned from him.

“Seeing Herman down on the ice was like seeing my father down there. It was that important to me. We spent 25 really, really good years together. This (Opening Night) made it very special. I’ve had (halting again) some good fortune in my career. The best break I ever had was meeting Herman Sitrick.”

In spite of the pageantry, somehow Sitrick’s story continues to fall through the cracks. Most major media outlets have not yet relayed his heroic tale and none came to the first-level suite to interview him. Meanwhile, back in July, the Chicago Baseball Museum informed Cubs president of business operations Crane Kenney of the Sitrick story. Kenney also had peripherally worked with Sitrick during the latter’s Cubs days. A day or so later, a Cubs official called Sitrick to allow him to choose the day he’d want to be honored at Wrigley Field. Unfortunately, Sitrick ended up taking a rain check for the planned Sept. 10 festivities due to the illness. Hopefully, the honors will be re-scheduled in 2018.

He was man behind famed panty-hose comic WGN spot

Sitrick already was a veteran of all things Cubs by the time McDonough, then a young marketing executive, brought him over from the Sting in 1983. Back in the 1950s and early 1960s, when WGN took over the Cubs radio rights, Sitrick was local sales manager. He supervised the Wieboldt’s department store buy that resulted in the hilarious live panty-hose commercial botched by a giggling Jack Quinlan and Lou Boudreau. Rather than an angry sponsor blaming Sitrick for the screw-up, Wieboldt’s loved the impromptu comedy routine – which became an all-time Chicago broadcast classic — and enhanced his stature with WGN bossman Ward Quaal. He counted among good friends Boudreau, Jack Brickhouse and Ernie Banks.

To Sitrick, still active in running his Skokie-based Sitrick Advertising Agency, the site of the honors did not matter that it was not at his old stomping grounds.

“I felt honored,” he said. “The hardest part at my age was getting down to the ice and going back up. I did feel honored I was being singled out that way.

“I never felt I was the center of attention until this happened. It was a first for me.”

Despite his self-effacing attitude, Sitrick’s family pitched him the concept of taking the honors to remind the masses of all veterans, plus his comrades who did not come back from France. Despite his multiple wounds that would have qualified him to get out of combat, Sitrick opted to go back into the line when superiors told him they were short of men.

The ceremony was a good excuse to get his entire family together. Too often such gatherings take place on sad occasions. Chicago attorney Ron Sitrick coordinated the affair and escorted his father to his UC destinations. Brothers David and Michael Sitrick flew in from Los Angeles with their spouses. Several grandchildren jetted in from the Phoenix area. Two great-grandchildren, Summer and Spencer, cavorted about the suite.

Four generations of Sitricks prove the value of life

The sight of four generations was another version of the end of “Schindler’s List,” in which life is precious and those who preserve it in the face of astronomical obstacles are truly the honored. So many thousands sprouted from the Jews that Oskar Schindler saved from the death camps. In Sitrick’s case, he only had to gaze upon three more generations in the suite to know his own life mattered. Somewhere in Germany, even more survived because he followed all golden rules.

And yet the Sitrick story keeps on giving. David Sitrick’s wife is Los Angeles attorney Miriam Goslins Sitrick. She is the daughter of Holocaust survivors, Herman and Hetti Goslins, who could not escape the Netherlands when the Nazis invaded in 1940. They had to find a place to hide once the Gestapo began rounding up Jews. This was an Anne Frank story that turned out positively 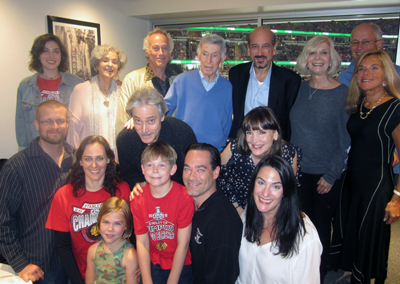 Four generations of Sitricks get together at the United Center. Forebear Herman Sitrick is in the light blue sweater.

“There was a wonderful Christian man who took them in, and took in my mother’s parents and my aunt,” Goslins Sitrick said. “My father said, ‘We’ll pay’ to be hidden. But the man kept saying, ‘This is my Christian duty. This is what I need to do.’ My father responded that we can’t stay here, we don’t know how long it’s going to be if you don’t take money. And the man then said, ‘Don’t you like me? Give it a try.’ 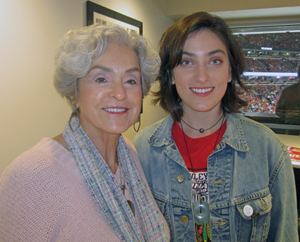 Miriam Goslins Sitrick (left) with daughter Arielle. Goslins Sitrick’s parents and other family hid from the Germans behind false walls across from local Nazi headquarters and somehow survived the war in a small Dutch city.

The Goslins hid behind false walls for the rest of the war, in spite of peril right on their doorstep and even closer. Several Germans regularly came into the home to be entertained by the housekeeper. Right across the street was local Nazi headquarters. Unlike diarist Frank and family, the hidden Jews were never caught, although Goslins Sitrick said the war ended fortunately when it did. The secret could not have been kept much longer.

Eventually, the Goslins emigrated here. Herman met his namesake, who had his own hands full several hundred miles south in the winter of 1944-45, and compared notes. Through marriage, the two timelines of life and its morals met and merged.

Given his preference, the Hawks’ honoree would rather his daughter-in-law’s story be fleshed out. And it will. But his final act as Corporal Herman Sitrick is to bear witness to the concept that two wrongs do not make a right. Sure enough, nephew Michael Socol, an obstetrics professor at Northwestern Memorial Hospital, got the full-play-by-play in the suite by the world’s most modest hero.

Sometimes, duty requires the spotlight be shined on you. Sitrick has never stopped being a hero, especially now.