Last week, noted baseball writer and Hall of Fame prognosticator Jay Jaffe, author of The Cooperstown Casebook wrote a column for ESPN entitled “Every NL team’s best player not in the Hall of Fame — and should he get in?” [1]

That story ignited a firestorm from Dick Allen supporters who  are trying to get him elected this December to the Baseball Hall of Fame when the Golden Days Era Veteran’s committee meets in Dallas at the Baseball Winter meetings.

“Dick retired because he had a bad Achilles tendon suffered in 1974 while playing with the White Sox. In fact he told the Phillies that before they made the trade for him in 1975. They didn’t care, they didn’t let the media know he was injured nor the opposing teams. They wanted him to bat 5th to protect Schmidt and Luzinski.  Ultimately it worked in 1976 when the Phillies won their first Championship of any kind since the 1950 Whiz Kids,” stated former Philadelphia Phillies groundskeeper named Mark “Froggy” Carfagno, who has since 2013 run a nonstop crusade to get Dick Allen elected to the Baseball Hall of Fame.
Visit the Dick Allen belongs in the Hall of Fame FaceBook group…

Reading that Allen’s alcohol issues shortened his career was another gut punch to Froggy, who had endured the pain in San Diego when Allen in December 2014 received 11 of 16 votes — or one short of the number required for election to the class of 2015 via the Golden Era committee.

Since that painful day in December 2014, Froggy has continuously campaigned for Dick Allen, now 78 years old and failing health, to get elected him to the National Baseball Hall of Fame the next time the Golden Days era committee met.

Injuries, not alcoholism, shortened the career of Dick Allen

Froggy asked this author, because of my medical expertise, to rebut the myth that alcoholism ended Dick Allen’s career prematurely as speculated by Jay Jaffe in his ESPN story.

I am a board-certified occupational medicine specialist and perform disability and impairment ratings as part of my practice.  I am also a certified substance abuse professional (SAP.)

I have Dick Allen’s and his family members’ permission to rebut the erroneous belief that alcoholism shortened his baseball career.  I am acting as his medical spokesperson.

I have actually performed a physical examination on him and have been with him on several occasions. I have spoken to several of his teammates (including his brother Hank) about this urban legend that alcohol, not injuries, shortened Dick’s career.

I can categorically state with medical certainty that it was a combination of physical injuries, not alcoholism, that shortened Dick Allen’s career.

I have outlined below his baseball career injury medical history:

He also reported chronic jaw pain due to tooth decay that accumulated over the years of playing.

He regularly played hurt, including when the Phillies brought him back to play in 1975.  The Phillies hid his chronic right shoulder issue to get him in the line-up to protect Mike Schmidt in the line-up.

With the advances in sports medicine available to the modern day ball player, Dick would have prolonged his career for several more years that would have allowed him to put up bigger numbers. 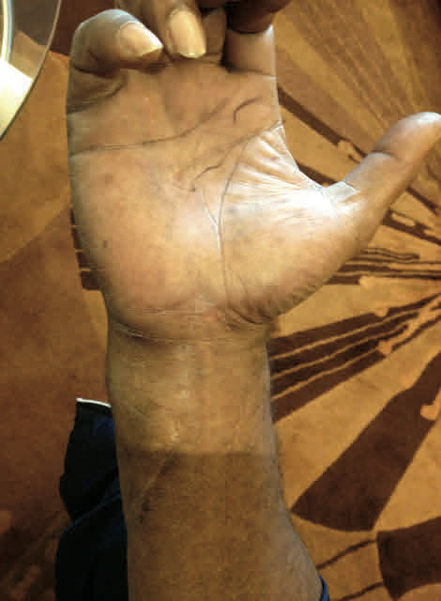 The picture of his right hand that I took in 2012 shows how large the surgical incision was to repair his hand. Photo courtesy of Dr. David Fletcher, M.D.

In an earlier publication Jaffe published in 2017 acknowledges some of Dick’s injury history, including his right hand laceration:

“The injury cost Allen some sensation in two of his fingers; he struggled with throwing during the rest of his career, especially in cold weather, and never spent a full season at third base again. [2]”

I examined Dick’s hand in June 2012. One wonders how he could even have continued his baseball career at all at age 25. His throwing arm was crippled by chronic right shoulder pain with limitations in range of motion, and his ability to grip a ball and a bat was also severely compromised by the permanent effect of the laceration of the distal ulnar nerve and several tendons that resulted in a claw-hand appearance to the hand. He had total loss of sensation along the ulnar nerve distribution (4th and 5th fingers.) The picture of his right hand that I took in 2012 shows how large the surgical incision was to repair his hand.

Debunking the myth that Allen was an alcoholic

In my professional opinion, Dick did not suffer from alcoholism, though I am well aware that Dick did drink alcohol.

His older brother Hank, who was a teammate in 1960 at Elimar and in 1972-73 White Sox (and recently retired as a scout for the Houston Astros) told me:

“I’ve witnessed firsthand, not a player, coach, or manager has ever espoused such negatively about drinking or anything else other than being the consummate teammate on every team he’s played on. Don’t get me wrong by any stretch of an imagination, he’s not an angel, nor did he pretend to be one. But he did stand up for his dignity and self-respect.”

Hank Allen explains that Dick was a product of his environment:

“After enduring four years in the minor league situations, he becomes somewhat of  pioneer when he arrives in major leagues with Philadelphia becoming their first outstanding minority player who is also faced with some of the same indignities he’s had to face from in his previous four years. Keep in mind you still have to perform and, produce and still try to maintain your sanity and dignity and self-respect. It’s a tough role for anybody to be placed in, let alone a 22 year old young man. Now with a better understanding of all that he’s had to deal with in entire career. Not to mention the injuries, lies, innuendos, accusations of alcoholism from such people like Bill James and others, I find it amazing he was able to accomplish the remarkable career he’s had. Without a doubt because of his personification , perseverance, and endurance he’s what a Hall of Farmer is all about.” 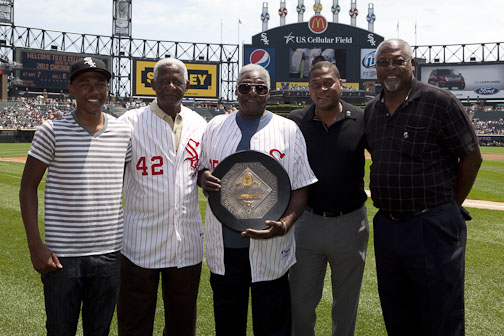 The Allen Family in June 2012 at the Dick Allen Tribute, Hank Allen is pictured 2nd to the left. Photo courtesy of Dr. David Fletcher, M.D.

As William C. Rhoden, who saw Allen play in Chicago in his 1972 AL MVP year, wrote in the New York Times, “The Dick Allen story has never been solely about statistics, but about perception and forgiveness…” While Allen fell one vote short, the perception about him has changed, and the large number of stories that appeared lately provided some better understanding of his complex behavior in the context of the times.

Before the vote announcement when he fell one vote short in December 2014, I had a 20-minute conversation with Dick Allen, who was waiting at his winter residence in Tampa for the announcement. He was upbeat and forgiving of all the past slights in his life. He has been very touched with people remembering his career and all that he had to endure.

As a strong practicing Christian, Allen said, “It is in God’s hands. I did all I could on the field.”

And, in the future, everyone will be able to see what Dick Allen did on the field when famed Movie Producer Mike Tollin finally finishes a long-awaited documentary on Dick Allen.

Tollin’s last documentary was the ten-episode  THE LAST DANCE about Michael Jordan and the Chicago Bulls that aired on ESPN in April and May 2020. 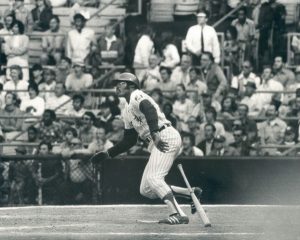 In late April 2020, during all the publicity surrounding THE LAST DANCE, Tollin had been talking up  his passion project as well. Tollin told Todd Zolecki of MLB on 4/24/20 “I am going to make this film whether he gets in or not. I have hundreds of hours of footage. It’s going to be the most personal thing I ever do. I’ll be in it, because it has to do with our relationship. It has to do with hero worship and how different that was 50 years ago… I think there’s an awareness, not only of what he did on the field, but what he endured off it.”[3]

In all the footage that Tollin stored away for this documentary is the painful reaction of Dick Allen’s son, Richard Allen, Jr., who traveled from Williamsport, Pa. to support his father, and Frog, when Dick fell one vote short in December 2014.

Frog hopes that in December 2020 Tollin will be able to film the final scenes of his upcoming project with a happy ending of Allen finally getting elected into the Hall of Fame.