With the help of this author, Anderson and her cousin Marge launched  https://www.clearbuck.com at the same time of the All-Star Game protest. Demographically speaking, these two woman may have been America’s least likely firebrand Web protesters/proprietors. Former MLB Commissioner Bud Selig refused to meet the spirited duo, who sat with me just a few rows away from Selig. 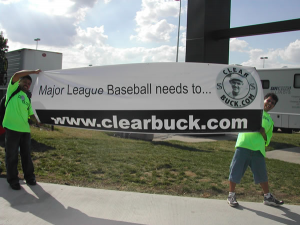 After Marge died in October 2003, Anderson spent the rest of her life crusading for her uncle, who maintained his home in Chicago after his expulsion from baseball. Weaver raised Anderson as a surrogate daughter when her father William Scanlan died in 1931. After Weaver’s efforts to get back into baseball failed, he tried to make it in the drugstore business. With his pharmacist brother-in-law William Scanlan, they operated six drugstores on Chicago’s South Side. Noticing the ex-player’s business sense, Charles Walgreen, whose own drugstore empire was about to skyrocket, asked Weaver and Scanlan to join him as junior partners. But they declined the invitation.

After rejecting Walgreen’s offer, the Great Depression hit, and the six drug stores closed. Buck and Helen Weaver were childless, and they raised Anderson and her older sister Bette Scanlan, as their own, until they finished high school and started careers at the Chicago Sun-Times.

Anderson admired her uncle, who walked with him to school and work. She noticed the praise and adoration showered on Weaver by passers-by. But not until later in life did, she fully grasp what her uncle had done in his baseball career. Anderson said Weaver never talked about his playing days. Uncle Buck’s signature grin was one of her predominant memories. Weaver died in January 1956 on the streets of Chicago.

Undaunted by Selig’s refusal to meet with her, Anderson’s crusade to restore her Weaver’s reputation continued on. She appeared at Chicago White Sox Fest events, where fans got to meet her and hear about Weaver’s cause. Chicago-raised actor John Cusack played Weaver in the 1988 film “Eight Men Out.”

Even former President Obama took up Buck’s cause after the White Sox won the World Series in 2005, urging former Commissioner Selig to reinstate Weaver.

At the request of the Clear Buck campaign, in a letter dated Nov. 23, 2005, then Illinois Senator Barack (Senator-Obama-Letter-to-Commissioner-Selig-20051123.pdf), Obama urged Selig “to conduct a posthumous investigation and hearing of the claims of Mr. Weaver’s family and those interested Chicagoans and others who believe fervently that this honorable man was treated unjustly. I appreciate your consideration of this request.”

On Dec. 6, 2005, Selig responded, “I certainly understand the great interest you have in the reinstatement of George Buck Weaver. As you know, none of my predecessors have seen fit to do so, but I have undertaken a very thorough investigation of this matter. These are very complex issues and very difficult to do proper research, although I am using our baseball historian, Jerome Holtzman of Evanston, Illinois, who is really the outstanding baseball historian of our generation.

“I can assure you that we will be very thorough in our review, and if there is anything you would like to discuss further about this matter, I would be delighted to do so. Although we have not met, I look forward to our paths crossing in the future.” wrote Selig to the future President.

In his role as the first Major League Baseball official historian, Holtzman was adamant that Weaver deserved to be exonerated in the matter. In 2004, Jerome Holtzman said of the more than the dozen players who have been banned from baseball over the years, that he considers Weaver the only one who, “has a chance to be reinstated, or at least should be considered for reinstatement.”

“If anybody should be absolved, then it should be Buck Weaver more so than Joe Jackson or any of the others,” said Holtzman in January, 2008, six months before he passed away. “Jackson was guilty as hell, but Weaver was an innocent bystander. He just got caught up in it, that’s all. Weaver should have spoken up. Of course, it would have been pretty difficult for him to speak up and betray his teammates.

In 2013, Anderson traveled along with her daughter Sandy Schley and granddaughter Kristi Berg to Philadelphia to appear at a Society of American Baseball Research (SABR) event marking the 50th anniversary of the publication of Eliot Asinof’s book “Eight Men Out.”

In March 2015, Anderson and her family launched their latest attempt to clear the name of Weave and sent an official request to Commissioner Rob Manfred, Selig’s successor, urging him to consider Weaver’s reinstatement because the player had “been denied justice for far too long” and because “it’s the right thing to do.”

On July 5, 2015, John Owens of the Chicago Tribune did a major feature story on Pat’s “Late Swing to Reinstate Buck Weaver.” https://www.chicagotribune.com/sports/baseball/whitesox/ct-spt-0705-buck-weaver-black-sox-reinstatement-20150703-story.html Owens traveled to Missouri and produced a short film on https://www.youtube.com/watch?v=XAnQil64RRI&feature=youtu.be on Pat’s crusade for her Uncle Buck.

Soon after, the story appeared MLB Commissioner Manfred wrote a letter on July 20, 2015 declining “to give additional consideration” https://chicagobaseballmuseum.org/wp-content/uploads/Commissioner-Manfred-response-Buck-Weaver-July-2015-1.pdf to this matter praising Judge Landis’ decision that saved baseball from further gambling scandals.

Though disappointed by this setback, Anderson kept pushing on and recently did some interviews with writers working on stories for the 100th anniversary of the Black Sox scandal to get her perspective on this seminal event in US culture.

We admired Anderson’s ageless spirit and enthusiasm and appreciated the stories she shared of life with her Uncle Buck. For more than 15 years Anderson took Weaver’s case to reporters, authors historians, a future President (Obama), and two MLB Commissioners, who refused to meet with her. Anderson vehemently argued that Weaver did not participate in the plot to throw the 1919 World Series.

Anderson was quick to point out Weaver’s .324 batting average and that as third baseman, he did not commit any fielding errors in the 1919 World Series. “He played eight games of flawless baseball,” Anderson said. 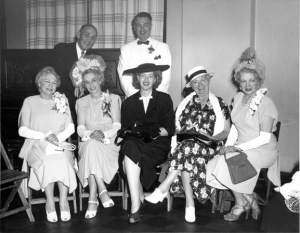 Anderson leaves behind an inspiring story about her efforts, but also the sad fact that restoring Weaver’s reputation did not happen in her lifetime. Her four children and her granddaughter Kristi will carry on the fight.