They talk about a buzz in the ballpark the day Kerry Wood threw a 20-K masterpiece to earn baseball immorality 20 years ago.

Yet even though Jerome Holtzman proscribed “no cheering in the pressbox,” a complementary buzz also enveloped the Wrigley Field pressbox on May 6, 1998 as Kerry Wood effortlessly mowed down a powerful Houston Astros lineup. 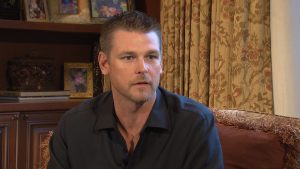 Kerry Wood always kept a level head about himself after his 20-K game, turning down invitations to appear on “The Tonight Show.”

With Wood and mound opponent Shane Reynolds breezing through the batting orders with a blizzard of strikeouts, this was going to be an on-time dinnertime for writers working a day game.

My vantage point was the third row of the pressbox, in my fifth season covering the Cubs for the Times of Northwest Indiana daily newspaper. Through much of that time, I had monitored strikeout wunderkind Wood’s progress with a countdown to his big-league debut.

I recall chasing him for a quick comment soon after he was drafted in 1995. Old front-office friend Scott Nelson rescued the 18-year-old Wood from my clutches after a quick quote, leading him into the training room. I also called Wood during his first full season in Class A in 1996, and interviewed him for my Diamond Gems radio show in the spring of 1997 about projecting his career. He had a kind of high-pitched voice. Wood’s later explanation was ballplayer-gutteral and not fit for regurgitation here.

In 1998 spring training, Wood fanned the Brewers’ John Jaha, the first big-league hitter he ever faced. This was going to be a highlight of my 10 days in Mesa, so I joined the Chicago Tribune’s Paul Sullivan in talking to Wood in the locker room before game’s end. That would be the last time Wood’s post-game analysis would be recorded by just two scribes.

When Wood finally reached the majors a few weeks into the season, he showed promise along the inconsistencies of youth.  Then, on May 6 in his fifth start, he had a potentially good matchup. Although the Astros were a strong contender, they fielded a predominately right-handed-hitting lineup.

Players’ and fans’ memories focused on the lousy, drizzly day in which Wood pitched. As one working on the clock and particularly hampered by rain delays, I was not worried about a stoppage. A typical damp spring day with very playable temperatures was the reality.

Wood had to nurse a 1-0 lead, but there was no talk about going for records or pulling him due to a youthful pitch count of, say, 100. He was pitching for his life against Reynolds.  He’d be a possibility to go at least eight, and nine was a consideration if he had a shutout going.

I still kept a full, semi-neat scorecard in 1998. The Wood game was particularly clean, just two Astros baserunners with one scratch hit. And a mess of K’s that kept multiplying, and the pace picked up. Woody got all three batters swinging in the seventh. He had 15 strikeouts, and that got our attention. In the eighth, he knocked down history.

Dave Clark whiffed leading off the eighth. Wood now had the single-game Cubs strikeout record of 16, passing up the likes of Dick Drott and Burt Hooton. When Brad Ausmus was caught looking to end the eighth, he had 18, tying Joliet’s Bill Gullickson for the rookie strikeout record.

The day’s only negative  then ensued as the tension in the ballpark really ramped up.

Chuck Wasserstrom, the Cubs’ assistant media relations director, sat two rows directly in front of me. At that point, I already was known for a historical bent, so Chuck turned around to ask when Gullickson set his record. The internet was dial-up and semi-balky in 1998, and sites of instant recall like BaseballReference.com did not yet exist. I did not know the exact date, but I told Wasserstrom it was sometime in Sept. 1980 (exact date Sept. 10) against the last-place Cubs in Montreal. I presume Chuck called Elias Sports Bureau.

A year later, I recalled the scene in my second book, on Sammy Sosa. Wasserstrom had read the passage, and came into the pressbox one day breathing fire. A young man from the same neighborhood and identical childhood rooting history for the Cubs as me, Chuck apparently did not want to be portrayed to other Cubs writers as asking for my assistance. A caste system has long existed in baseball media. He yelled at me, and I responded to just act professionally. But Chuck asked about Gullickson on May 6, 1998, and why would I have turned him down? Sadly, I never really connected to Chuck even though we started out in the same foxhole — and it was in our mutual best interests the Cubs win. 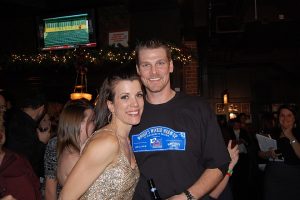 The long-term after-effect of the 20-K game was the ability of Sarah and Kerry Wood, pictured at their annual Winter Warmup, to raise a ton of money for charity in Chicago.

Such conflict was way in the future as Wood  continued his magic in the ninth. He pitched like the wood-repelling substance applied to the ball by Ray Milland in the 1949 comedy “It Happens Every Spring.” I kept the integrity of my scorecard, recording No. 20 as I dashed down the ramps to the clubhouse. Wood was pinned up against his locker, first one to the left  at the bottom of the stairs leading from the main concourse. He could not leave until the media mob left, and he handled all comers. I also recall Cubs president Andy MacPhail and GM Ed Lynch dashing about. When I saw both Billy Williams and Ron Santo, I quickly asked, “Was this Koufax?,” meaning was Wood as good as Sandy Koufax in his Sept. 9, 1965 perfect game against the Cubs? Both replied in the affirmative.

In later years, Wood ensured he’d never get trapped at his locker in similar fashion. When Mark Grace was let go after the 2000 season, Wood took the first baseman’s prime location right near the entrance way to the bathroom. He could backtrack if necessary. One time he excused himself from a conversation with me, saying he had to answer nature’s call. Again, I cannot repeat his exact words.

The whole post-game atmosphere suggested an earth-shaking event that required every last bit of creativity and perspective from those covering it. I wrote two stories for the Times, but the local-yokel bent of the editors misplayed the secondary story. They never understood their readers, just 20 to 25 miles from Soldier Field and U.S. Cellular Field and closer than northwest-suburban  patrons of the pro-sports-friendly Daily Herald, were dyed-in-the-wool Chicago sports fans.

In the wake of the Wood game, which I rate as the most dominating in history, I did persuade sports editors Dave Campbell, then Mike Sansone to publish a little “Kid K” graphic after every start. I arranged with assistant pitching coach Rick Kranitz, who handled the Cubs’ radar gun, to feed me Wood’s fastest pitch in each start. Several times, Kranitz reported Wood threw 99 mph — on his final pitch!

Again against the Times’ grain, I placed a story on how Wood prepares in his between-starts bullpen warmup during the next homestand. I sat near the bullpen as Wood and pitching coach Phil Regan as they worked. Spying me, Regan asked Woody to throw the “splitter.” That did not sound right. Why would Wood need a split-finger fastball to add on to three other great pitches — and risk arm strain? Something sounded like a prank. I wasn’t going to fall for it. I double-checked with manager Jim Riggleman, who confirmed my feelings I was being put on. Apparently, Wood and Regan wanted to get a rise out of Lynch if I wrote up the splitter angle.

Baseball is very choreographed and corporatized now. In 1998, though, players and coaches did not mind some improv humor involving the people who covered them. Those days are sorely missed.

Wood eventually had to modify the elbow-stressing slider-curve pitch that resulted in many of the 20 K’s. He underwent Tommy John surgery in 1999, then later had shoulder surgery. In spite of his injuries and a keen sense of disappointment, he re-invented himself as a closer by 2008 and stretched his career to 2012. I am proud I established good rapport with Wood and wife Sarah. The couple moved back from Arizona to raise their three children in Chicago, and have raised a boatload of money for charity.

Sarah and Wood were yet not a couple in 1998, so she was the only one who missed out on 20-K. Stick around baseball long enough, and you’ll see something you haven’t seen before — or will again. May 6, 1998 was just such a time.