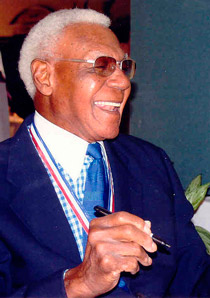 Buck O’Neil (left) as an honored baseball senior citizen (photo credit: kc congdon) and (center) as the first African-African American big-league coach, with the Cubs in 1962. At right is Gene Baker first breaking in with the Cubs in 1953. (Baker photo courtesy of the Leo Bauby Collection).

In this edition, two former Kansas City Monarchs who moved on to the Cubs in the mid-1950s were re-united via phone — future Hall of Famer Buck O’Neil and ex-infielder Gene Baker. They talked about the challenges of breaking the color line in the majors, including O’Neil bumping into yet another another barrier — becoming a big-league manager.