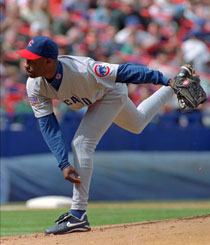 Evanston’s Kevin Foster showed flashes of excellence, but not a lot of consistency, during parts of five Cubs seasons (Photo courtesy of the Chicago Cubs).

This edition features a 1994 interview with Kevin Foster, one of the few Evanston natives to make the majors. Foster had just been called up to the Cubs, for whom he pitched in the starting rotation for all or parts of five seasons. With his proud parents chiming in on another phone connection, Foster talked about his aspirations. He would become a little better than a .500 pitcher, prone to the home-run ball, through 1998. Foster died too young, of renal cancer, at 39 in 2008. He was one of three members of the 1997 Cubs rotation to die at young ages. Frank Castillo and Jeremi Gonzalez died via a drowning accident and lightning strike, respectively.