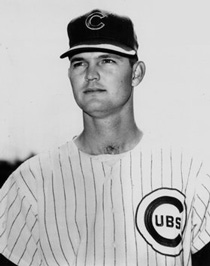 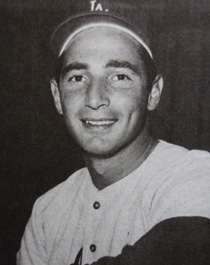 Sandy Koufax had to pitch the game of his life to beat Bob Hendley on Sept. 9, 1965. Both Koufax and Hendley took no-hitters in the seventh before “Sweet Lou” Johnson blooped a double to right off Hendley.

In this edition, ex-Cub Bob Hendley re-lives his Sept. 9, 1965 duel with Hall of Famer Sandy Koufax during the latter’s perfect game at Dodger Stadium. Hendley was interviewed with five other big leaguers who had played in the perfecto for a special 40th anniversary “Diamond Gems” retrospective show. Hendley gave up just one hit, which had nothing to do with the unearned run scored against him. The one hit total allowed by both pitchers set a major-league record for fewest hits ever in a game. Both Hendley and Koufax took no-hitters into the seventh inning in what may be the greatest pitching duel in history.