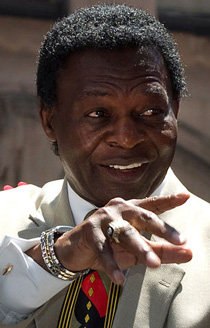 Left: In addition to his Hall of Fame career in St. Louis, Lou Brock went on to handle a number of different businesses. Right: Lou Brock fronted an ad for the heating-oil firm for which he worked. Spokesman status for a mainstream company was rare for an African-American in 1963. Click on image for larger view…

In this edition, a 2009 interview with Hall of Famer Lou Brock is featured. Brock reveals an off-the-field side rarely recounted from his 1962-63 Cubs days — his winter job as a combination heating-oil salesman and furnace repairman.Interestingly, a Feb. 3, 1963 Chicago Sun-Times Sunday feature on ballplayers’ off-season jobs did not include Brock’s unusual assignments. The article included Sox pitcher Joel Horlen working as a ticket salesman for the team and Cubs outfielder Bob Will working for the Wrigley gum company. Brock, of course, departed the Cubs in an infamous June 15, 1964 trade for sore-elbowed pitcher Ernie Broglio.