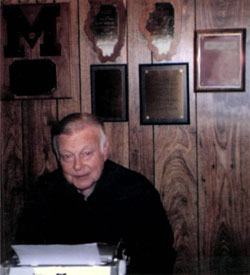 Red Mottlow at his typewriter, not long before his death in 2003.

This edition has the late 1990s recollection of longtime Chicago sportscaster Red Mottlow about the art of re-creating baseball games in the radio studio via the codes transmitted by Western Union ticker. Announcers would add sound effects and pauses for effect to their play-by-play from the ticker accounts of faraway games.

Mottlow, the first Chicago sportscaster to take a microphone into the city’s locker rooms for interviews in the 1960s, re-created such games in Minneapolis in the 1950s. He also re-created a Braves-Reds game in Cincinnati for WGN-Radio on Sept. 6, 1959, the tape of which the Chicago Baseball Museum hopes to air on this site in the future. Mottlow passed away at age 77 in May 2003.

One of the corps of re-creators in radio’s prime was future President Ronald Reagan with Cubs broadcasts on WHO-Radio in Des Moines in the mid-1930s.