While keenly watching White Sox games even in frigid weather, “Duty” likely thought back to his days playing in North Dakota.

<< Main Duty Page | Download this story as a PDF

North Dakota may be a booming oil-rich, jobs-full state, but it’s still one of the more remote and least-populated parts of the country.

Imagine how much more distant that Upper Plains region was in the 1930s. Only a few radio stations hooked up to national networks brought in the outside world when small cities and villages were the only breaks from the unceasing prairie. The blooming wheat and corn in summer contrasted with wind-whipped snow and frequent below-zero temperatures from Thanksgiving to nearly Easter.

The remoteness had one positive effect, though. It put distance between the hard-working people of German and Scandinavian descent and the abject prejudice that afflicted American society in that virulently intolerant era.

Restrictions were slapped upon almost every ethnic group who had not come over on the Mayflower in this Great Depression-wracked society. Slurs and epithets were thrown around freely. Ceilings were placed on upward advancement based on nationality and religion. A Catholic could not get elected president or successfully run for many other offices.

“Duty” in his Bismarck uniform in 1935. The team was loaded with Negro League star pitchers.

African-Americans were on the bottom of the list and suffered the most. So the exception to history came with integrated baseball teams representing the semi-isolated communities nearly 15 years before Jackie Robinson broke the color line.

In this environment, Ted “Double Duty” Radcliffe excelled with his baseball skills, made some money, gained more fame and identified with his experience nearly 70 years later. Chicago’s own Negro League superstar wore a road “Bismarck” jersey to the Jimmy Kimmel Show in 2003.

Talk of integration of the major leagues would not heat up until the end of the 1930s.. Some college and high school athletic teams north of the Mason-Dixon line and in the Far West were integrated by this time, while strict social and economic segregation still held forth away from the field and classroom. Joe Louis’ and Jesse Owens’ singular feats showing how African-Americans could be world champs were still a couple of years away.

And yet racial prejudice and all the byzantine rules governing relations between white and black had not taken hold to govern this underpopulated area.

“The only blacks known in these Dakota towns were railroad workers,” said native Minnesotan Kyle McNary, official biographer of Radcliffe, known here and everywhere in this special web site as “Duty.” McNary’s book, detailing not only Duty’s 103-year life but also the Dakota baseball experience, is Ted “Double Duty” Radcliffe: 36 Years of Pitching and Catching in Baseball’s Negro Leagues.

“There was more ignorance than bigotry in North Dakota,” McNary added. “I interviewed people who had gone to games. One said, ‘I remember my mom saying, go up to talk to them, see what they talk like.’ They had no concept what an African-American was. It was more a novelty and they were winning money for their team. They were turning their little town team into almost a major-league caliber team overnight.”

Even though Minnesotans considered themselves more liberal and tolerant, they had more prejudices and pretense than their fellow citizens west of the Red River.

“North Dakotans just didn’t have anybody they wanted to impress, they didn’t give a damn what anybody thought of them,” said McNary.

Money trumped all other concerns when rosters of “town teams” were constructed as the main form of summertime entertainment so far from population centers.

“North Dakota and Minnesota had ‘town teams,’ and hired ringers for big games,” said McNary. “A lot of money was gambled on these games.

“People stayed in the area to watch Jamestown, Valley City and Bismarck play each other. People might go to the Twin Cities to see (Triple-A) baseball, but not as far away as the major leagues in Chicago. Jamestown had a Class D team for a while in the Northern League, but most of North Dakota did not have organized baseball.”

Semi-pro baseball had no unofficial color line, with no rules prohibiting participation based on race. Handsome pay and fringe benefits lured selected players away from the Negro League. 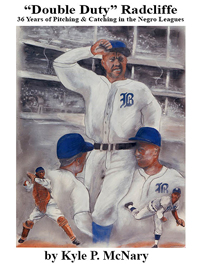 So Jamestown, directly on a line west of Fargo, imported several black players in 1932. This practice extended to several Minnesota towns along with a couple of teams in Iowa and Montana. Pitching great Chet Brewer played in Crookston, Minn., receiving a house to live in and car to motor about as part of the deal. He only had to play three days a week, a working vacation compared to Negro League schedules.

“He felt he was treated like a major leaguer,” McNary said.

In 1933, Jamestown hired Barney Brown, a black left-hander later compared to Warren Spahn for his stylish repertoire. Brown beat Bismarck, so backers of the state capital’s team lost a lot of money. Neil O. Churchill, a Bismarck auto dealer and hotel owner who owned the team, called Abe Saperstein in Chicago for help.

As part of his sports business that was highlighted by the Harlem Globetrotters, Saperstein was the biggest booking agent for black players in the Midwest. Saperstein also fielded the Cleveland All-Nation team, a true diamond melting pot.

“Their shtick was that everyone had a different nationality,” McNary said. “The third baseman was Italian, shortstop was Greek, second baseman was Irish and they did have a black player on the team. As a traveling team, they did not have a home audience they had to appease.”

Saperstein couldn’t have come through with a bigger name for Churchill. Satchel Paige, Duty’s childhood buddy in Mobile, Ala., was able to jump the iffy contracts tendered by the Pittsburgh Crawfords for Churchill’s big bucks. Amazed he was playing on an integrated team in Bismarck for the first time in his life, Paige engaged Brown in several sensational pitching duels while thousands of fans packed ballparks to overflowing in Bismarck and Jamestown.

Paige was supposed to return to Bismarck for the 1934 season, but changed his mind. Meanwhile, Brown recommended Duty to the Jamestown management. He took Bill Perkins and Steel Arm Davis with him.

“They were called the Colored Quartet,” McNary said of Duty, Brown, Perkins and Davis

Duty gets $100 more a month to manage 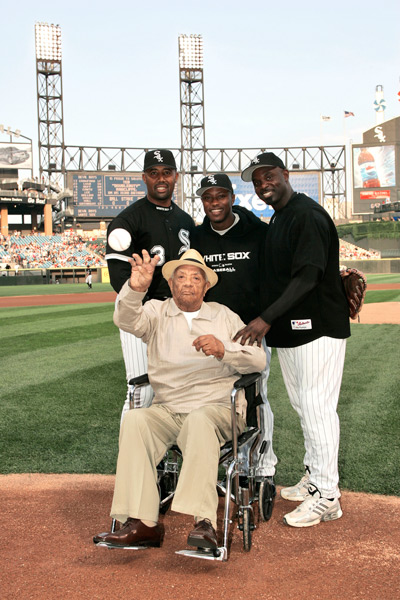 While throwing out the first pitch at U.S. Cellular Field, “Duty” could regale (from left behind him) Harold Baines, Willie Harris and Carl Everett stories of not only the Negro Leagues, but playing and managing on an integrated team in North Dakota in 1934. Photo courtesy of Chicago White Sox.

Early in the season, Duty was promoted to player-manager, boosting his pay $100 to $450 a month. McNary claimed Duty was the first manager of an integrated pro team in American baseball history. The first black manager in organized baseball was onetime Cub Gene Baker at the Class A New York-Penn League Batavia Pirates in 1961. “I was happy,” Duty told McNary. “The people gave me so much up there. I saved $2,000 during the season.”/p>

After the ’34 season concluded, the first and only duel between Duty and Babe Ruth was thwarted when Ruth pulled out of a traveling major-league all-star team, scheduled to play in North Dakota, at the last minute due to illness.

”They were advertising in (local) newspapers that the Babe was coming,” said McNary. Jimmie Foxx took Ruth’s place on the Dakota swing. Ruth later rejoined the All-Stars when they went to Japan, where catcher-spy Moe Berg secretly took photos of the Tokyo skyline later used by the U.S. military in World War II.

Duty merely had to drive up the road in 1935 for more lucrative employment. Strangely, Jamestown’s management opted to go for an all-white team for ’35. So Churchill, loading up, signed Duty, Paige, Brewer, Hilton Smith and knuckleballer Barney Morris. Paige and Duty were paid better than many big leaguers – Paige drew $1,000 a month and Duty $750. Duty again managed the team.

“Churchill signed five of the top 20 or 25 Negro League pitchers for one team,” McNary said.

“Neil Churchill is still to me, being younger than him, like a brother or father,” Duty told McNary. “He treated me and Satchel like we were kings. He was something else. He used to send me money and he didn’t even know if I was coming back the next year or not. He never turned me down if I needed it. One winter he gave me $200 in advance so I’d have money for the winter.

“But Churchill was smart because me and Satchel were an investment. Every time we pitched it was a sellout. We made money for him and he treated us nice.”

By Duty’s recollection, Churchill even stood up for his players when the Ku Klux Klan — ranging over much of the country in its 1920s peak — harassed him about his integrated team and raised hackles over Duty’s and Paige’s relationships with local white women.

“Duty claims he was treated really well in Jamestown and Bismarck,” McNary said. “Not that he didn’t feel the sting (of prejudice). He did. But he had the kind of personality that he just didn’t give a damn. He didn’t have the personality to let stuff like that bother him.”

Obviously, his personality triumphed over all obstacles. The KKK couldn’t ruin Duty’s memories of when the best players – no matter what skin color — money could buy lifted up the otherwise Depression North Dakota summers of eight decades ago.