Timing and politics are intertwined in baseball, just like peanuts and Cracker Jack once were.

Thus Katie Krall has picked just the right moment to learn and thrive as a uniformed female pro baseball coach. Supplementing her own merit and drive is a game-wide commitment to diversity that not only promotes women working in baseball operations in the front office, but also in the dugout. 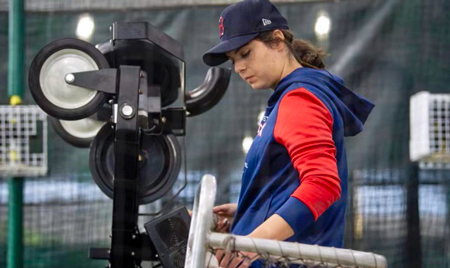 Katie Krall works with a pitching machine in the Red Sox’s recent mini-camp in Ft. Myers. (Photo courtesy of the Boston Red Sox)

The very presence of a woman in uniform might have been unthinkable two decades ago, let alone a half-century back, when Leo Durocher ordered Chicago Today sportswriter Linda Morstadt off the field at Wrigley Field as a supposed distraction to his Cubs players. Move the clock forward 17 years, and Chuck Tanner, best-known for his unorthodox handling of Dick Allen with the White Sox, harangued and harassed Robin Monsky, his Braves media relations director, until she was driven out of the organization.

Now, the hiring of Park Ridge, Ill. native Krall as the second female coach in the Red Sox farm system, soon after the Yankees hired a female manager, results in a series of stories temporarily distracting from baseball’s labor problems. But the news was hardly earth-shaking in the manner of Jackie Robinson’s and Frank Robinson’s breaking the color line as a player and manager, respectively, in 1947 and 1975. Baseball seemed to be organically moving this way, anyway.

“I definitely feel appreciative,” Krall said amid the warmth of southwest Florida. “I am the beneficiary of my time, and of all the women that came before me. I hope I can move the needle more. END_OF_DOCUMENT_TOKEN_TO_BE_REPLACED