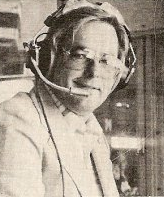 He worked alongside two of the best loved Sox announcers in history, Harry Caray and Jimmy Piersall. In that time he saw a young manager and future Hall of Famer, Tony LaRussa get his first taste of success. He saw new Sox ownership in Reinsdorf and Eddie Einhorn take over for Veeck. He saw the formation of a team that had three straight winning seasons, capped off by the 1983 Western Division champion “Winnin’ Ugly” White Sox. END_OF_DOCUMENT_TOKEN_TO_BE_REPLACED