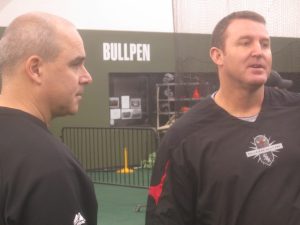 END_OF_DOCUMENT_TOKEN_TO_BE_REPLACED

The flip of the calendar to 2018, the pending Hall of Fame announcement and a couple of long-form YouTube videos got me thinking about the Great Home Run Race of 1998, now tainted by PED accusations.

Twenty years have zipped by at warp speed since Mark McGwire and Sammy Sosa captivated a generally contented public, existing in a boom economy and terrorism-light environment that hasn’t been replicated since. Covering Sosa from my then-assigned pressbox seat at Wrigley Field and in a handful of games in Milwaukee seems it took place last month.

The recriminations have been heavy ever since about how this race was fueled with McGwire and Sosa both achieving home-run totals that previously were straight out of science fiction. There is never more head-shaking and hand-wringing than when the new Cooperstown inductees are announced. At this writing, a true Clean Gene, Peoria’s Jim Thome, is an odds-on favorite to win the writers’ vote. Thome missed by one season playing on the White Sox with Frank Thomas, yet another natural strongman who decried players who apparently inflated their numbers by chemical means.

Fans just wanted to pack their cares away and watch Sammy Sosa slug during the Great Home Run Race of 1998.

And Major League Baseball itself is no longer policing the internet with secret-police zeal. Entire vintage ballgame telecasts are now routinely posted on YouTube. I couldn’t help but tune in again to the warm September weekend when Sosa slugged his 60th homer in a wild Cubs’ 15-12 comeback victory over the Brewers. Slammin’ Sammy, as he was fondly called in this different era, went beyond the outer limits with his 61st and 62nd in another rally-cap special, an 11-10 triumph in 10 innings, the next day. Sosa’s second, Maris-busting clout started a two-run ninth inning rally. Factoring in the Brewers’ 13-11 win on Friday, that may have been one of a handful of three-game series in which all teams scored in football-sized double-digit numbers in every contest. END_OF_DOCUMENT_TOKEN_TO_BE_REPLACED