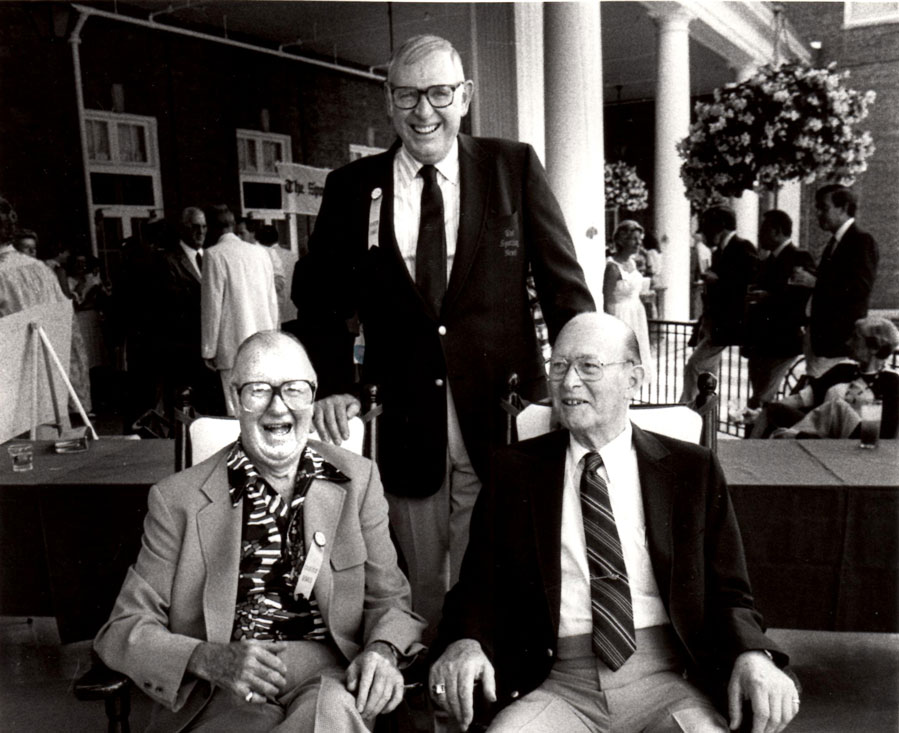 Joined by two friends, Jack Brickhouse soaks up the atmosphere at the Hall of Fame in 1983, when he was inducted into the broadcasters’ wing with the Ford Frick Award.

<< Main Brickhouse Page | Download this story as a PDF

Have broadcast, will do.

That was Jack Brickhouse’s modus operandi in an unparalleled career that took him from modest beginnings at WMBD in Peoria in the depths of the Great Depression as a teenage announcer in 1934 to the Ford Frick Award at the Hall of Fame in 1983.

Brickhouse is best known for his baseball work on WGN-TV. But he did so many kinds of broadcasts, sports and otherwise, in his career that what he didn’t do is almost as newsworthy. He literally was the man for all seasons in sports, from World Series to NFL championship games, from Rose Bowls to the NBA playoffs. And away from the field and arenas he handled political conventions, man-on-the-street sessions, kids shows, prime-time network TV dramatic programs and earth-shaking bulletins, such as announcing on WGN Radio that President Franklin Roosevelt had died.

The Chicago Baseball Museum pays tribute to Brickhouse in this special web site at a time the Cubs are honoring him with a special bobblehead day, as part of their Wrigley Field 100th anniversary celebration. Brickhouse was so much a part of the old ballpark’s history from his arrival in Chicago in 1940 to on-air reunions with WGN colleagues like Vince Lloyd and Lou Boudreau in the 1990s. He was present both when the ivy was just three years old and when the lights were in their 10th season of illumination.

This web site recalls different facets of Brickhouse’s life. In addition to stories, the Chicago Baseball Museum is presenting photos, largely from the collection of Pat Brickhouse, Jack’s wife.

Also featured are a wide variety of video and audio highlights from his career. Our thanks go to WGN-TV production director Bob Vorwald for key video highlights. Appreciation also must go to lifelong Cubs fan Al Fujara, who recorded the audio of Brickhouse highlights off his home TV set going back to 1966. If not for Fujara’s then-youthful enthusiasm, most of those calls and the narration by the likes of Wendell Smith and John Drury would have been lost to history. Overall audio production duties, as he does for the Chicago Baseball Museum’s vintage Diamond Gems podcasts, were handled skillfully by “Sweet Lou” Carlozo. And a helping hand was lent by Lance Tawzer, curator of the Elmhurst Historical Museum, which has a dandy baseball exhibit on display with the Chicago Baseball Museum’s assistance.

Last but never least, the production of the site could not have taken place without the creativity and attention to details from web masters Carol Kneedler and Marissa DeWeese at O3 Internet Consulting.

1946 — In only season working away from Chicago, serves as New York Giants radio baseball announcer.

1956 — Behind the NBC-TV mic for Bears-Giants NFL championship game at Yankee Stadium.

1959 — Behind the WGN-TV mic for Sox’s pennant-clincher in Cleveland, then broadcasts live from team plane on WGN-Radio all the way through to taxing up to ramp at Midway Airport.

1960 — Begins color telecasts of Cubs and Sox games on WGN-TV.

1963 — Call on Davey Whitsell’s interception and runback for TD against the Detroit Lions is one of his most memorable.

1967 — Broadcasts only Sox no-hitter when Joel Horlen masters the Tigers at Comiskey Park.

1968 — Overall celebrity profile and identification with Cubs rises even higher when Sox bolt for WFLD-TV (Ch. 32) and P.K. Wrigley permits WGN to televise 60 or more road games each season.

1969 — Call on Willie Smith’s walkoff pinch-hit homer on Opening Day is his best-remembered and served as symbolic soundtrack for memorable ’69 season.

1975 — P.K. Wrigley considers him for job as Cubs president, but Durocher nixes plan by refusing to serve as Brickhouse’s general manager.

1979 — At the mic for second-highest-scoring game in MLB history, the Phils’ 23-22 slugfest triumph over Cubs that is replayed in its entirety on WGN the following winter.

1981 — Amid fan acclaim, does final telecast at Wrigley Field.

1983 — Inducted into broadcaster’s wing of Hall of Fame in Cooperstown.

1988 — Officiates at pre-game ceremonies for the first scheduled night game at Wrigley Field.

1997 — Participates in career retrospective on “Diamond Gems” radio show, segments of which are replayed on Chicago Baseball Museum site.